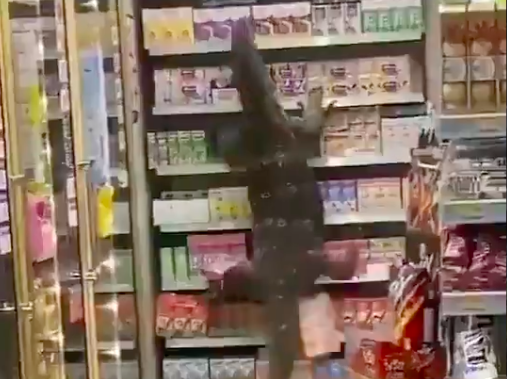 The creatures are known to often grow beyond 10ft.

A monster reptile scaled a shelf at a 7-Eleven outlet in Bangkok, frightening shoppers and sending them scurrying for safety.

A video was tweeted by a person present and attracted nearly a million views before it got deleted.

But the clip has already gone viral across social media and offers a clear view of how the lizard clambered up a shelf of milk cans, knocking them off on its way to the top.

“The shelves are ruined! Oh my God,” a witness was heard exclaiming.

While monitor lizards normally do not go shopping in Bangkok, they are found abundantly in the Thai capital.

About five years ago, 100 monitor lizards were removed from Lumphini park, a 150-acre facility where residents were cycling, jogging and enjoying themselves on paddleboats. The park and its surroundings were home to hundreds of such monitor lizards in the past.

Some of them can grow beyond 10ft and damage trees and flowers. But officials say they do not attack humans, preferring to consume dead fish, or birds and turtles.

While many of the lizards have been transferred to a wildlife sanctuary, some have been allowed to remain in the park to attract international tourists.

Many local people also consider the monitor lizard (known as hia) to be a sign of good luck and prosperity.