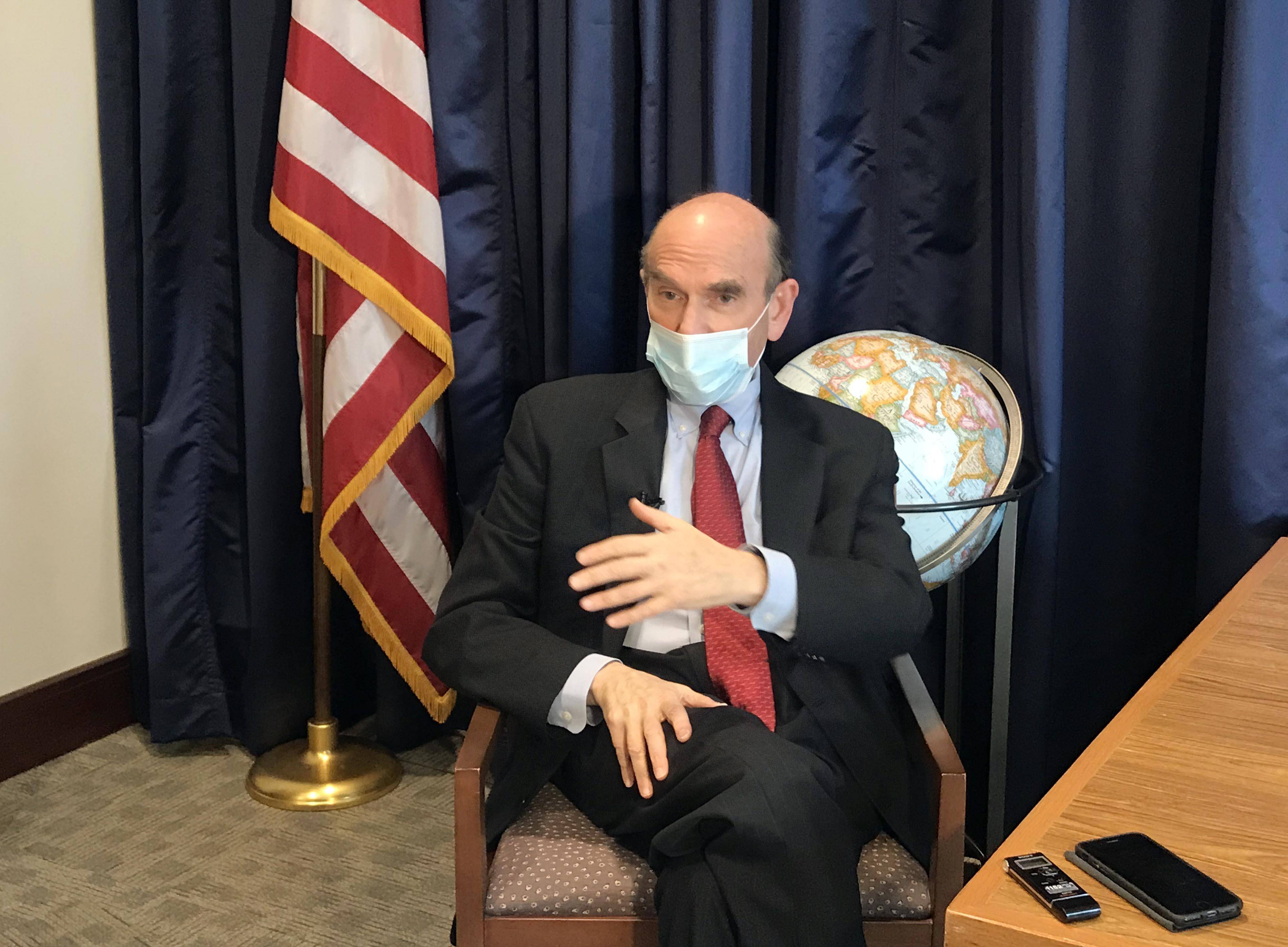 Abrams was in the UAE as part of his regional tour that also included Saudi Arabia and Israel.

It is a position cutting across party lines in the United States not to restore the 2015 Iran nuclear deal without changes, a senior American diplomat told Wam, adding that addressing Tehran’s missile programme and regional behaviour in a new agreement will make a better deal.

Elliott Abrams, Special Representative for Iran and Venezuela at the US State Department, also said the UAE’s Iran policy based on "de-escalation and stability" in the region is a stand "for all of Iran’s neighbours that is what you seek, and that is what we seek."

In an exclusive interview with WAM at the US Embassy in Abu Dhabi on Thursday, he emphasised that the US plan to sell F-35 fighter jets to the UAE would take place without any problems and that the "process will roll out very smoothly."

As many commentators believe that President-elect Joe Biden would reconsider the Iran nuclear deal, known as the Joint Comprehensive Plan of Action, JCPOA, which was signed with the P5+1 - the US, UK, France, China, Russia and Germany in 2015, Abrams said, "I think that there is no desire on the part of the United States simply to return to the JCPOA without changes or modifications. I think that is a bipartisan position in the US."

He pointed out that the JCPOA was concluded in 2015. "Even if you liked it in 2015, it really does not serve in 2021 and there will have to be changes, so I think it is not a one day matter. It's a complicated and somewhat lengthy negotiation."

Abrams was in the UAE as part of his regional tour that also included Saudi Arabia and Israel. He met Sheikh Abdullah bin Zayed Al Nahyan, UAE Minister of Foreign Affairs and International Cooperation on Thursday.

A veteran diplomat who served various Republican regimes, Abrams was a deputy assistant to the president and deputy national security advisor in the administration of President George W. Bush, where he supervised US policy in the Middle East for the White House.

He was an assistant secretary of state in the Reagan administration. He has authored five books on topics related to US diplomacy and foreign policy.

Incumbent US President Donald Trump announced in 2018 his country’s withdrawal from the JCPOA, causing extreme controversy.

About a possible new agreement with Iran, Abrams said, "We think that Iran is feeling the pressure [of economic sanctions] and if that leverage is used, it will be possible to get them to agree to do things they don't want to do, namely to change their behaviour in the region, their missile programme and their nuclear programme."

However, the veteran diplomat added, "It would be tragic thing to discard all of this leverage without using it."

Asked whether addressing Iran’s missile programme and regional behaviour in a new agreement will make a better deal, he answered, "Absolutely," adding, "We believe in the Trump administration that one of the great shortcomings of the JCPOA is that it dealt with [only] one piece of Iran's behaviour that had terrible long-run possibilities [the nuclear programme]."

"It [the nuclear deal] did not deal with what we face right now, which is an Iranian nuclear programme that is actually producing ballistic missiles, and we see them in the hands of the Houthi [militia in Yemen] who used them under Iranian guidance and instructions to hit Saudi Arabia. We see all of this a destabilising conduct throughout the region, right up to the Mediterranean," Abrams continued.

"That has to be addressed before we can say that we have any kind of reliable agreement with Iran that will actually bring stability."

The US government announced officially this week that it plans to sell F-35 fighter jets to the UAE, which has been a hot topic since the Abraham Accords saw light in August.

Asked about this step, Abrams said, "Well, the procedures take a while. The critical thing, of course, is firstly with the administration then the Congress. Once that happens it's more or less non-controversial."

Regarding the time required for the transaction, he clarified, "It's bureaucratic, let me put it that way. There is the manufacturing time. It's not as if the F-35s are sitting in a hangar in the US and then as soon as the Congress approves it, they would fly out. Unfortunately, that is not the case."

However, he does not find any problems for the deal. "I think this [delay] is bureaucratic. Process will roll out very smoothly as it has done in the past. Happily, we have a very good defence relationship between the US and the Emirates, and we've had many experiences where many administrations approving a sale, sending it to the Congress and getting it approved. We now have happily many American armaments here, helping defend the United Arab Emirates."

Commenting on the illegal Iranian occupation of three Emirati islands since 1971, the American diplomat said the UAE Government has been "extremely responsible in handling" the case.

"They [UAE government] offered either direct negotiations or take it to a neutral party like the International Court of Justice. This is a responsible way a country acts when it is faced with this kind of behaviour by another," he added.

"Unfortunately, thus far, the regime in Tehran has refused to engage in serious discussions. It's something that every country in the world that seeks peace and stability in this region should condemn."