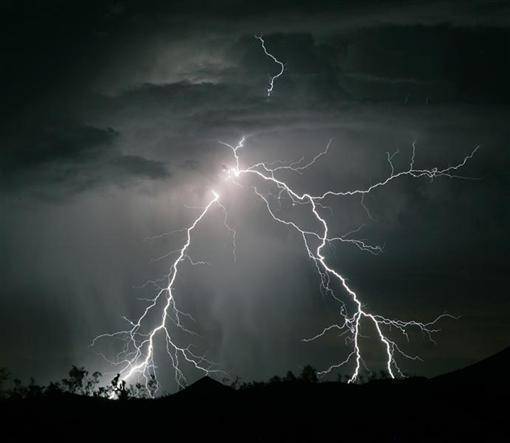 On July 11 alone, at least 70 people were killed by lightning strikes in Uttar Pradesh, Madhya Pradesh and Rajasthan.


July was one of the worst months for India this year as far as lightning strikes and related fatalities were concerned.

Data released by the Centre for Science and Environment (CSE) recently showed that there was a 34 per cent rise in lightning strikes in India.

On July 11 alone, at least 70 people were killed by lightning strikes in Uttar Pradesh, Madhya Pradesh and Rajasthan. Though the United States too reports lightning strikes, the cumulative toll last year was less than 30.

>> Lightning kills 76 in India, including selfie-takers near famous fort

Dr Sunil D. Pawar, a scientist at the Indian Institute of Tropical Meteorology (IITM) in Pune and an acclaimed expert on lightning strikes, told Khaleej Times that their analysis showed a 25 per cent year-on-year uptick in the natural calamity between 2019 and 2020.

“Surface heating and moisture availability are the main factors for lightning generation,” he said. “In the global warming scenario, both these factors are increasing. It has been observed that most parts of India have shown an increase in lightning activity over the last 20 years,” he added.

Pawar pointed out that several parts of India, including the north-east, the northwestern part of the Himalayan foothills, and the eastern coast have of late shown a sharp rise in lightning activities.

He cited the trend as a global phenomenon and noted that many countries have observed an increase in lightning activity. However, improvements in lightning forecasts can help reduce damages. “Educating people about precautions they should take during lightning is essential to reduce deaths,” he said.

Lightning strikes killed 1,697 people in India between April 1, 2020, and March 31, 2021, according to the second annual Lightning report brought out by ReliefWeb, the humanitarian information service provided by the United Nations’ Office for the Coordination of Humanitarian Affairs (OCHA).

India reports the maximum number of lightning deaths in the world.

Several other states also witnessed huge increases in lightning strikes during the year.

Though the southern state of Andhra Pradesh does not figure in this list, it reported one of the worst days in recent memory.

Lightning has also been the single largest cause of deaths due to natural disasters in India since 2002. In January 2001, the earthquake in Bhuj, Gujarat, claimed more than 13,700 lives. However, over 40,000 lives have been lost in the country due to lightning strikes since then.

India’s National Crime Records Bureau (NCRB), which monitors deaths, said that since 2001, more than 42,000 people have been killed due to lightning. Most of the deaths have been reported in rural areas, with cities accounting for less than five per cent. Seventy per cent of the deaths were of victims sheltering under trees.

The OCHA report said there has been “phenomenal improvement” in early warnings in India. “The India Meteorological Department (IMD) issues forecasts,” it said. “Medium range for up to five days, short range till three days, nowcast up to three hours, and Damini mobile application has a 40-minute specific window. Be that as it may, there’s still a lack of protocol and mechanism for last-mile connectivity with the public about the issuance of alerts for lightning strikes.”

Lightning strikes have tremendous power, and they can decimate the person or object upon impact.

According to the National Weather Service in US, a typical lightning flash is about 300 million volts and about 30,000 amps. In comparison, household current is 120 volts and 15 amps.

“There is enough energy in a typical flash of lightning to light a 100-watt incandescent light bulb for about three months or the equivalent compact fluorescent bulb for about a year,” it added.