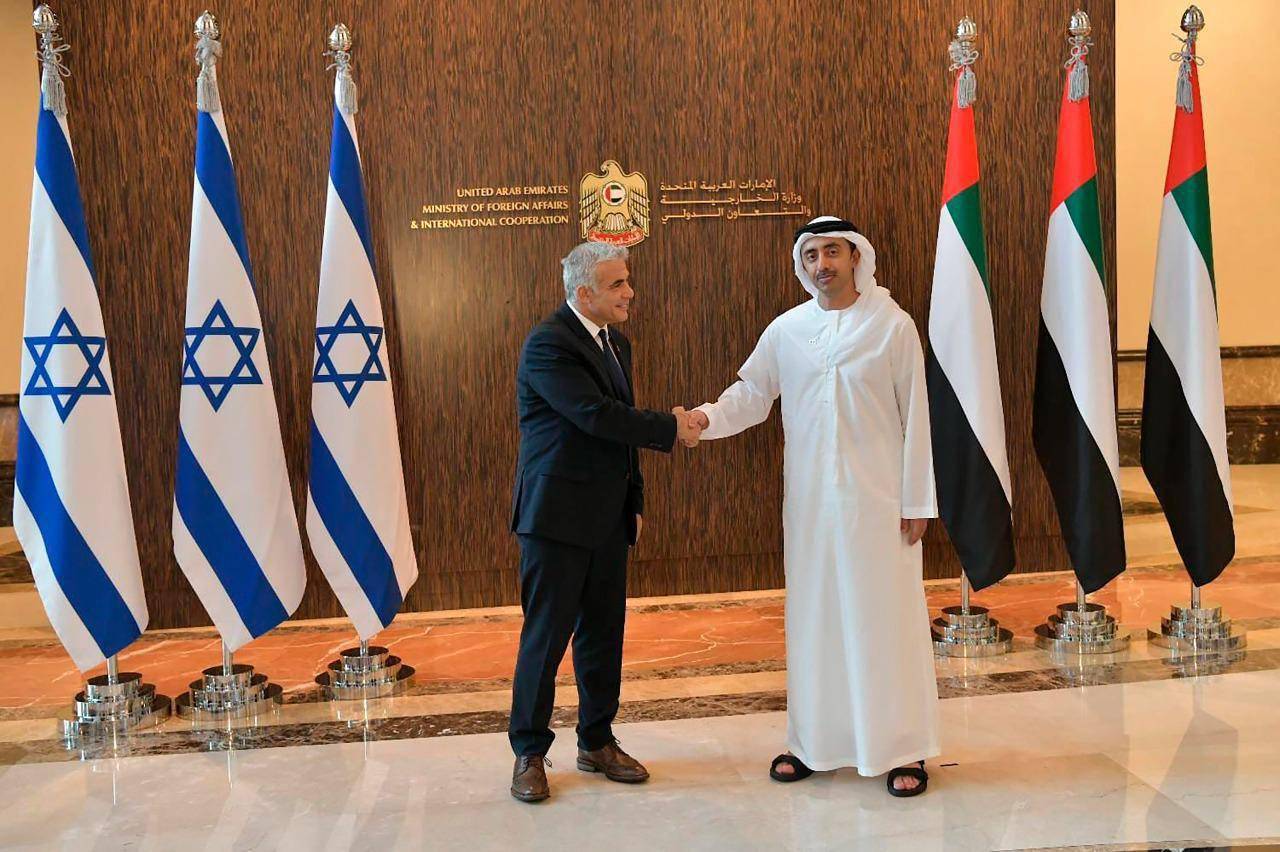 We are seeing friendship and love, and these warm sentiments are having a positive effect throughout the world.


There was no Benjamin Netanyahu, and no Donald Trump or Jared Kushner in Abu Dhabi or Dubai as an Israeli foreign minister set foot in the UAE for the first time.

But their absence in no way diminished the significance of Yair Lapid's historic visit. In fact, the shuffled deck of leaders now carrying the torch of Abraham Accords underscored the lasting value of last year's diplomatic breakthrough and put the focus on the benefits derived by the people of these two countries, and the region, and not the politicians.

In making the UAE an immediate priority, the message from Israel’s newly formed coalition government was clear: Its recent rapprochement with the UAE and three other Arab countries is bigger than any one government, president or prime minister, and will move forward.

By hosting Lapid, Emirati leaders delivered an equally powerful statement: Just as the new Middle East that suddenly burst into plain view last year has continued to develop after the end of the Trump presidency, so too will it broaden and deepen without Netanyahu as prime minister.

We are now truly living in a moment of great hope, and I say that not only because I have spent the last 15 years relentlessly pursuing the cause of Muslim-Jewish partnership, and Arab-Israeli understanding and coexistence. What has blossomed in recent months from the Mediterranean Sea to the Arab Gulf surpasses even these worthy causes.

We are seeing friendship and love. The atmosphere is more akin to a family reunion than the defrosting of ancient enmity. And these warm sentiments are having a positive effect throughout the world.

In recent weeks, I held meetings with the US-based ambassadors of the UAE, Bahrain, Azerbaijan, Kazakhstan, Kuwait, Oman, Qatar, Saudi Arabia, Sudan and Uzbekistan. One theme common to my discussions in Washington was the desire of many of these countries to maintain the momentum of the normalisation process from last September. No one described the passing of the baton from Netanyahu to Lapid and new Israeli Prime Minister Naftali Bennett as cause for concern or lessened enthusiasm for a new regional dynamic.

Among the post-normalisation states, there is overwhelming interest in safeguarding their ties to Israel and leveraging these for the unique cultural and economic benefits they can yield. In those still holding out, there is greater hope for movement on the issue of the Israeli-Palestinian peace process that might allow them to explore a more public-facing position vis-à-vis Israel.

As one ambassador from the consortium I consulted told me, "Our relations with Israel are beyond leader-to-leader or even government-to-government; they are now about people-to-people. This relationship is built on our peoples."

The manifestations of a new people-to-people partnership are increasing daily, many of them behind the scenes. We all have seen – or even participated in – the previously unimaginable spectacle of tens of thousands of Israeli and Emirati tourists now able to visit each other’s country, or the manifold new startups, investments and business partnerships that have sprouted since the Accords.

But relationships are enrichening in subtler ways, too.

From North Africa through the Middle East to Central Asia, governments are more comfortably talking about a regional future that includes Israel. Arabs and Israelis are putting aside old stereotypes to familiarise themselves with each other’s cultural, historical and religious heritages, and how they can partner to advance tolerance, security and economic prosperity.

Contrary to many media misconceptions in the West, the process of rapprochement taking place is as much bottom-up as top-down in approach. And the gracious reception Lapid received in the UAE from government leaders and Emirati citizens and residents demonstrated the new spirit of unity emerging.

Countries across the world are closely watching the UAE's trailblazing efforts, gauging their next steps.

But as many ambassadors told me in recent days, something bigger than politics is stirring as governments and nations weigh the scenario for engaging Israel.

And as the UAE has shown the world, the people are ready for a new era of relations with Israel, and a more peaceful, tolerant and harmonious future.

Rabbi Marc Schneier is president of the Foundation for Ethnic Understanding and co-author with Imam Shamsi Ali of 'Sons of Abraham: A Candid Conversation About the Issues that Divide and Unite Muslims and Jews'.