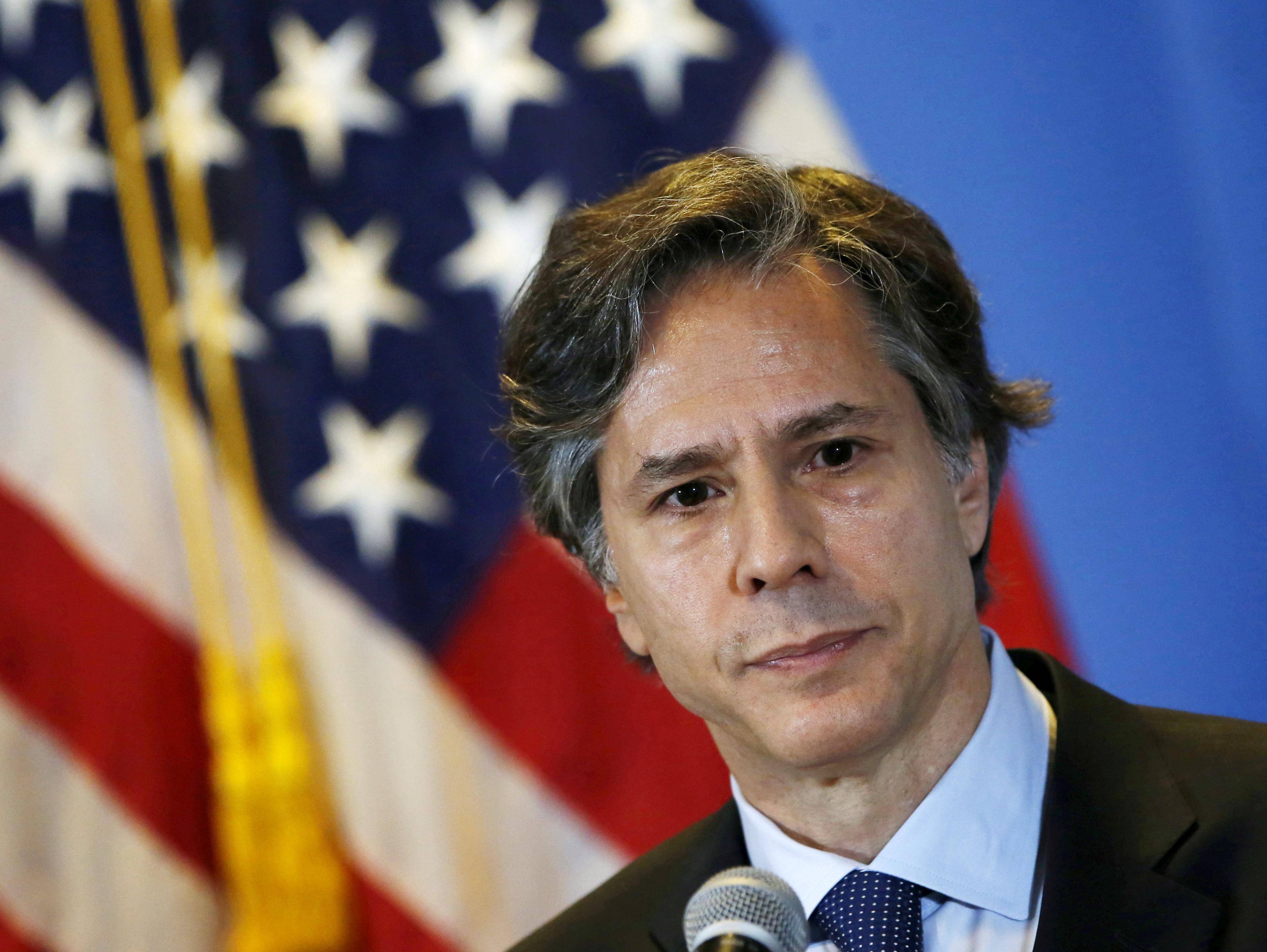 Antony Blinken has been nominated as Joe Biden's chosen candidate to be US Secretary of State.

US President-elect Joe Biden announced on Monday key figures for his cabinet, picking long-time foreign policy advisor Antony Blinken to be his secretary of state and former US chief diplomat John Kerry as his special climate envoy.

He picked Avril Haines, the former deputy CIA director, as his director of national intelligence, the first woman to ever hold that position.

Biden also said that long-time diplomat Linda Thomas-Greenfield will be nominated to serve as his ambassador to the United Nations, with status as a cabinet member.

Today, I’m announcing the first members of my national security and foreign policy team. They will rally the world to take on our challenges like no other—challenges that no one nation can face alone.

It’s time to restore American leadership. I trust this group to do just that. pic.twitter.com/uKE5JG45Ts

And Jake Sullivan, who was a security aide to Biden when he was vice president, was appointed white House national security advisor.

All are veterans of the former 2009-2017 Obama-Biden administration, and deeply experienced in their fields.

Kerry, who was secretary of state from 2013 to 2017 and signed the Paris climate accord in 2015 on behalf of the United States -- only to see President Donald Trump withdraw from it -- will be made a member of the national security council, the first time the council has had a specialist on climate change, Biden's office said.

Mayorkas, a former federal prosecutor, was director of US Citizenship and Immigration Services and then DHS deputy secretary under president Barack Obama.

Sullivan was director of the Policy Planning Staff at the State department and deputy chief of staff to secretary of state Hillary Clinton, and was a lead negotiator in the early talks for the Iran nuclear deal that Trump withdrew from.

"We have no time to lose when it comes to our national security and foreign policy," Biden said in a statement.

"These individuals are equally as experienced and crisis-tested as they are innovative and imaginative," he said.US President-elect Joe Biden on Monday named the deeply experienced Antony Blinken for secretary of state, also nominating the first female head of intelligence and a czar for climate issues, with a promise to a return to expertise after the turbulent years of Donald Trump.

As Trump continued to make flailing attempts at overturning the results of the election three weeks ago, Biden's rollout of cabinet names was his biggest step yet to signalling he is ready to take over on January 20.

The list put out by Biden's team ahead of a formal announcement Tuesday demonstrated a push to lower the temperature in Washington and restore traditional US leadership abroad.

"We have no time to lose when it comes to our national security and foreign policy," Biden said in a statement.

"These individuals are equally as experienced and crisis-tested as they are innovative and imaginative."

Blinken, a former number two of the State Department and a longtime advisor, will spearhead a fast-paced dismantling of Trump's disruptive "America first" policies, including rejoining the Paris climate agreement and the World Health Organization and resurrecting the Iran nuclear deal.

Biden named the first woman, Avril Haines, as director of national intelligence, and the first Latino, Alejandro Mayorkas, to head the Department of Homeland Security, whose policing of tough immigration restrictions under Trump was a frequent source of controversy.

Signaling the Democratic president-elect's campaign promise to raise the profile of global warming threats, he named former secretary of state John Kerry as a new special envoy on climate issues.

And in a further message of US reengagement with the international community, Biden named career diplomat Linda Thomas-Greenfield for UN ambassador. Jake Sullivan, who advised Biden when he was vice president under Barack Obama, was named national security advisor.

The picks underline an emphasis on professionals whom Biden already knows well, in contrast to the Trump White House where officials were often picked without having traditional background for the job or proved incompatible and departed in acrimony.

The announcements come against an unprecedented backdrop of Trump refusing to concede defeat and blocking Biden's access to the normal process for preparing an incoming government.

So far only a slowly growing minority of Republican leaders has denounced Trump's conspiracy theory that mass fraud robbed him of victory, despite there being no evidence for this.

Many of Biden's cabinet picks will require confirmation in the Senate, where Republicans hold a narrow majority, although this would change if Democrats score an upset victory in two Georgia Senate runoff elections.

Trump remains defiant in spite of repeated failures by his legal team to prove their allegations in court.

The president, meanwhile, has largely halted at least his public work duties, while heading out to a golf course he owns in Virginia half a dozen times since the election.

On Monday, the White House once more announced that Trump had no public events scheduled.

He has also not taken questions from reporters since the election -- a previously unimaginable silence from a president who for most of his time in office sparred near daily with the press.

His options, however, are dwindling rapidly.

With Biden having won a comfortable victory, Trump is seeking to disrupt the normally routine process of state-by-state certification of results, followed by the formal December 14 vote by the Electoral College.

His campaign's latest focus is on seeking a two-week delay to certification of results in Michigan, which Biden won by 155,000 votes on November 3.

A Michigan state board was set to meet on the issue Monday.

Pennsylvania, another crucial state in Biden's win, was expected to issue its certification after a federal judge threw out the latest baseless Trump challenge on Saturday.

More cracks appeared in the facade of Republican unity over the weekend with Trump confidant and former New Jersey governor Chris Christie calling the president's legal team a "national embarrassment."

Senator Patrick Toomey, from Pennsylvania, said after the court ruling there that Trump had "exhausted all plausible legal options."

And on Monday, Senator Rob Portman, another Republican, said it was "time to expeditiously resolve any outstanding questions and move forward."

"There is no more sacred constitutional process in our great democracy than the orderly transfer of power after a presidential election," he wrote in The Enquirer newspaper.

There was also a push from Trump's highest profile Wall Street backer, Stephen Schwarzman, who heads the Blackstone private equity group, who told Axios "the country should move on."