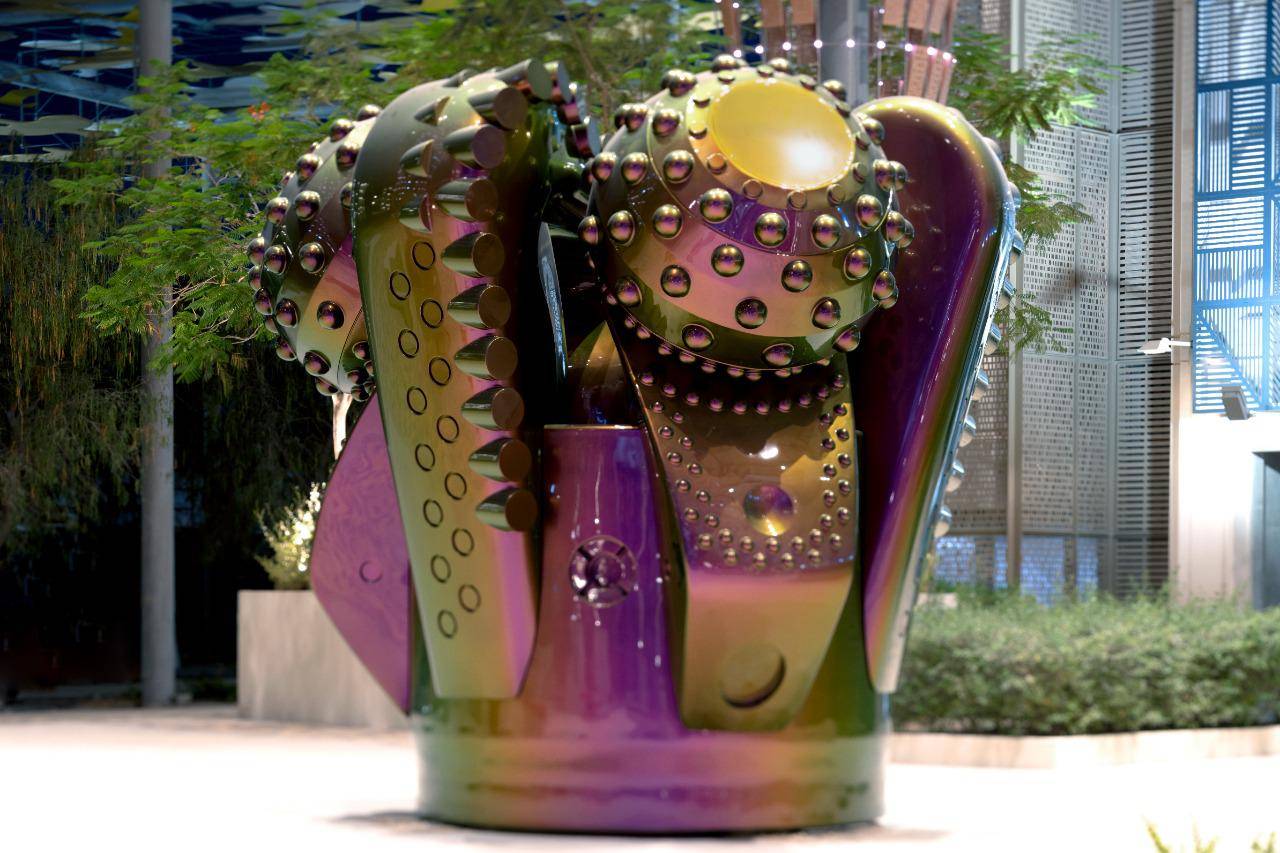 As the first permanent artwork at Expo 2020 was unveiled recently, we meet the brains behind an ambitious project that aims to spotlight the UAE’s commitment to arts and culture and take the Expo legacy forward

Earlier this month, Expo 2020 unveiled its first permanent art installation — a ginormous, iridescent, oil drill-shaped sculpture by Kuwaiti artist Monira Al Qadiri, which marked the launch of Expo 2020’s creative initiative — the Public Art Programme. The initiative will bring together 11 artists from the UAE and around the world, while also impressing the country’s own footprint on the global cultural map. With the Expo’s theme of ‘Connecting Minds, Creating the Future’, the Public Art Programme aims to capture this very essence, of bringing global perspectives together to foster the idea of cultural dynamism.

The widely anticipated event will open its doors to the public from October 1, 2021, to March 31, 2022. Dr Hayat Shamsuddin, senior vice-president, arts and culture, Expo 2020, is responsible for the Public Art Programme and the bespoke Design and Crafts Programme. She identifies art, especially public art, as an important way of enabling Expo 2020’s wider mission of bringing people from across the world together, to imagine the world of tomorrow. “We have 191 countries coming together for Expo 2020. So the world will be in Dubai, and the world will be in dialogue in Dubai. The artworks will encourage and facilitate that discourse. A lot of thought has gone behind how these public art pieces have been positioned around the Expo site. There’s a conceptual narrative behind the artworks,” says Dr Hayat, an Emirati.

EXPLORING THE POWER OF IMAGINATION

At the heart of this initiative lies the concept of imagination. Dr Hayat says the ethos of the project is to emphasise how humans connect with each other, what they share in common and how they come together through the power of imagination and storytelling.

“The UAE has always been a centre for connecting people and civilisations. So, we wanted a strong narrative behind the Public Art Programme, one that captures this spirit of the UAE,” adds Dr Hayat. “The Public Art Curator for Expo 2020, Tarek Abou El Fetouh, has curated the programme in a way that tells the story from this point in the universe — our point in the universe — incorporating the connections we have with the rest of the world.”

Abou El Fetouh strongly believes that in places where language cannot communicate the message, art can bridge the gap. “Many philosophers over time have tried to gather what is common between people, between human beings that inhabit different parts of the world. And they all have agreed that the main skill we all have in common is the power of imagination. And when we think of imagination, we immediately think of art and creativity,” mentions the Egyptian-born art curator. “As part of Expo 2020, different countries from around the world will come together in one place, so we wanted the public art to be centred on a common thread that we, as humans, share.”

The Public Art Programme, which draws inspiration from the famous Arab mathematician, astronomer, and physicist Ibn Al Haytham’s Book of Optics (c. 11th century), will showcase never-seen-before, contemporary art pieces for visitors to engage with and exercise their imagination. “If we translate the title of the book literally from Arabic, it would translate to ‘The Book of Sceneries’. It is a deeply intriguing and scientific account of visual perception,” says the Brussels-based art curator. “The book explores the philosophical notion that whatever you see in your reality, you only see a part of it and compose the rest of it in your mind, through the power of imagination, prior knowledge and other such influences,” adds Abou El Fetouh.

As the first curated permanent open-air art exhibition in the UAE, the Public Art Programme is a primary way in which the legacy of Expo 2020 will be carried forward in years to come. “The beauty of this programme is that the discourse will continue even after the Expo shuts its doors. The countries may leave but the discourse and exchange of knowledge will continue to take shape. And you will see it in the public realm, as a key to your imagination — to shared imagination,” says Dr Hayat, adding that it was a natural progression to weave these beautiful, permanent artworks within the Expo site, which will be transformed into District 2020 — a city of the future and a model global community.

These artworks will play a vital role in defining this new district, interweaving visual arts with the architectural landscape of the city. “You’ve got the open space, you’ve got the fantasy-like architecture, and then you put creativity into it, which births big landmarks that become crowdpullers for years to come. They become part of that moment in history,” says Dr Hayat.

Today, the UAE is a centre for creativity and knowledge in the region and a melting pot of different cultures. Dr Hayat says that this ethos will most certainly be reflected in the programme. “We are very much a global hub. I represent the UAE as much as Tarek or Monira do. We all represent the UAE of today and we’re very connected with the world. It was imperative to communicate this aspect of our identity as a nation through arts at the Expo,” she adds. “And Monira [Al Qadiri] is a fantastic example of the global citizen that represents our modern societal fabric.”

THE BEGINNING OF A JOURNEY

Monira Al Qadiri, the first artist to unveil her permanent artwork at Expo 2020, is from Kuwait, was born in Senegal and educated in Japan. “Sometimes, I like to call myself a mutant,” she jokes. “My parents are from Kuwait but have ancestry from Iran and Saudi Arabia, and they studied in Russia. So, there was always a Russian influence in our home. I studied in Japan, so that’s where my ideas were formed. That’s where I turned into an adult. I have also lived in Beirut, the Netherlands and now I live in Germany,” the artist tells us, acknowledging the intrinsic influence that her global upbringing has had on her contemporary artworks.

The artist’s gigantic sculpture Chimera was unveiled on the Expo site on July 4. “Creating this piece as a permanent artwork in a public space, within the Expo 2020 site, was a dream. Such opportunities are rare for contemporary artists in the region. Usually, you see monuments about the history of the Gulf, pearl diving boats, camels, tents, coffee pots. But very rarely do you see permanent works about our contemporary life and recent past,” she says.

Chimera, which refers to a mythical being, is a futuristic artwork based on the shape of an enlarged oil drill with bulging elements that resemble pearls. The sculpture is the artist’s way of imagining the history of the Gulf region, merging the pre- and post-oil eras into one body. “It’s coated with this pearly, oily colour, through which I wanted to depict a tie between the past, going into the post-oil present and finally, to the future, diversifying the economy beyond oil, which is where Dubai has highly advanced,” explains the Kuwaiti artist. She also mentions being deeply inspired by the works of Japanese artist Tar Okamoto, who created a very large sculpture for Expo 1960 in Osaka. “It’s one of the works that I have always admired — the idea that this event birthed an enormous artwork, which became an emblem of his practice. The monument is now part of Osaka’s history.”

At a time when grand images are just a swipe away, there is something about public art that is very gratifying not only to the viewer, but also the artist. “It has a very different dimension that you, as an artist, need to think about. How do you want people to feel when they look at your work in the years to come? What do you want them to think about? It’s not just following the trend of the day,” says Al Qadiri. “The artwork will live there for many, many years. It will become part of the urban landscape, people’s memories, their identities, their feelings about a specific place that they live or work in. I’m as excited for Expo 2020 as I am about the legacy it will leave behind.”