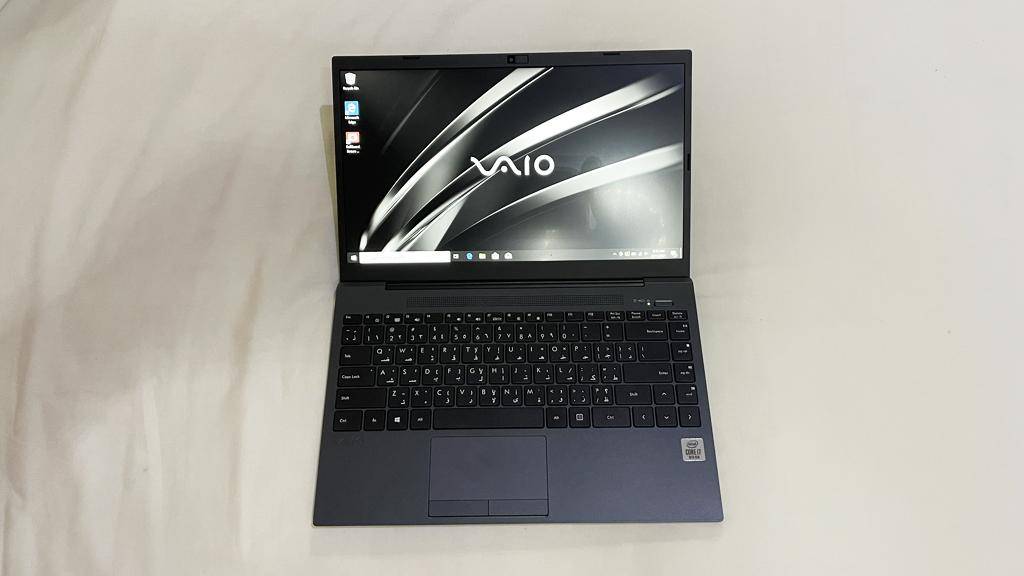 A sleek build and comfy-to-the-eyes experience are among the Vaio FE14's aesthetics.

Business? Entertainment? An all-around laptop from an all-familiar name


Yes, Vaio is still very much in the laptop game — even if Sony produced its last one in 2013 and sold off the unit the following year. It made a grand comeback in the Middle East in 2019 and just last month, AMD's Ryzen chips made their debut on them.

So yeah, they've been quite busy and have introduced a number of laptops to this part of the world. We're getting a chance to see how one of them works out — plus experience a little bit of nostalgia — in the Vaio FE14.

The Vaio FE14 has, basically, a simple, no-frills build — but we seriously got that little nice touch of nostalgia seeing that iconic logo on its solid-looking cover.

It's a really clean build, and, as a matter of fact, the FE14 is actually positioned as a business laptop. It does show in its metal finish and dark design, which gives the impression that it does indeed mean business. You'll also be able to swivel its 14-inch screen all the way to around 70 degrees, so you have that rather wide range of viewing options that'll suit your comfort.

One advantage of a full-fledged laptop is the fact that it can hold more ports and, let's face it, even if ports are going smaller, we still need those good ol' reliables (save for an optical drive): On the FE14 is a host of ports, including three USB-As, an HDMI slot and a USB-C port, plus an SD card slot.

The keys have just the right height and it's effortless when typing. The keyboard also has an anti-spill feature, but be aware that if indeed a spill happens, quickly wipe it off and take it to your nearest service centre. Biggest drawback? It doesn't have a backlit design. If you've memorised the keyboard, congratulations if you're in the dark (don't worry, the screen will light it up a bit for you).

We just find it odd that the trackpad is a little off to the left. While we do have our own manners in combo-ing up keyboard and trackpad use, it's better suited if the latter is dead centre to keep a better grasp of what's above it. We found ourselves stretching our right hand more than usual with this setup.

And we also find it cute that its camera has a little sliding lid you can use to cover it up. Hey, you'll never know, and even Zuck does it.

Chip-wise, there are basically two versions of the FE14, listed above. And while both are still part of the 10th generation of Intel processors, both first hit motherboards in 2019. So you can make an argument that they're 'old'.

Nevertheless, the i5-10210U and i7-10510U chips (part of the Comet Lake gang) — the latter of which was sent us for this review — still hold up pretty well, as they're in the upper mid-range class. Our model, though, has the lower-end 8GB/512GB; this already gave us impressive speed, so we're quite confident on what the 16GB/1TB combo offers.

There weren't any apparent lags and we had no trouble scooting our way through apps, with transitioning smooth. This meant we were able to go through tasks and were able to get our jobs done without any significant slowdowns. Entertainment was also nice; the display doesn't harm your eyes and the audio — speakers are just above the keyboard — was also good.

Now, if this is a business laptop, we're surprised that its battery life is, as Vaio says, lasts a max of seven hours. That's quite short, and you're sure to scramble for its charging block in no time. An intensive day at work — sprinkled with some extracurricular activity — dragged our unit just past the five-hour mark. And in our standard one-hour YouTube-at-full-brightness test, we kissed goodbye to 22 per cent of battery life.

It's also slow in recovering its lost energy.

As usual, the most intensive tasks such as video, streaming and games are the biggest zappers. As much as its performance has been great, the battery part makes it lag a bit. It's also worth mentioning that it doesn't heat up that much even after you go gung-ho on it.

The Vaio FE14 lives up to its billing as a very reliable laptop, with a very nice finish complementing it. We're just wary of its battery life, which could've been better and does affect the experience pound-for-pound. Its pricing, while still fair for its proposition, can be also a sticking point, with a number of laptops out in the wild that have quite similar specs — some even higher — but at a lower tag.

We can make an argument that its main innard is a generation behind, but we also need to understand its positioning in the market. This won't necessarily be an issue, especially if you plan to use it other than for graphic-intensive routines. It's a very good all-around laptop, anyway.