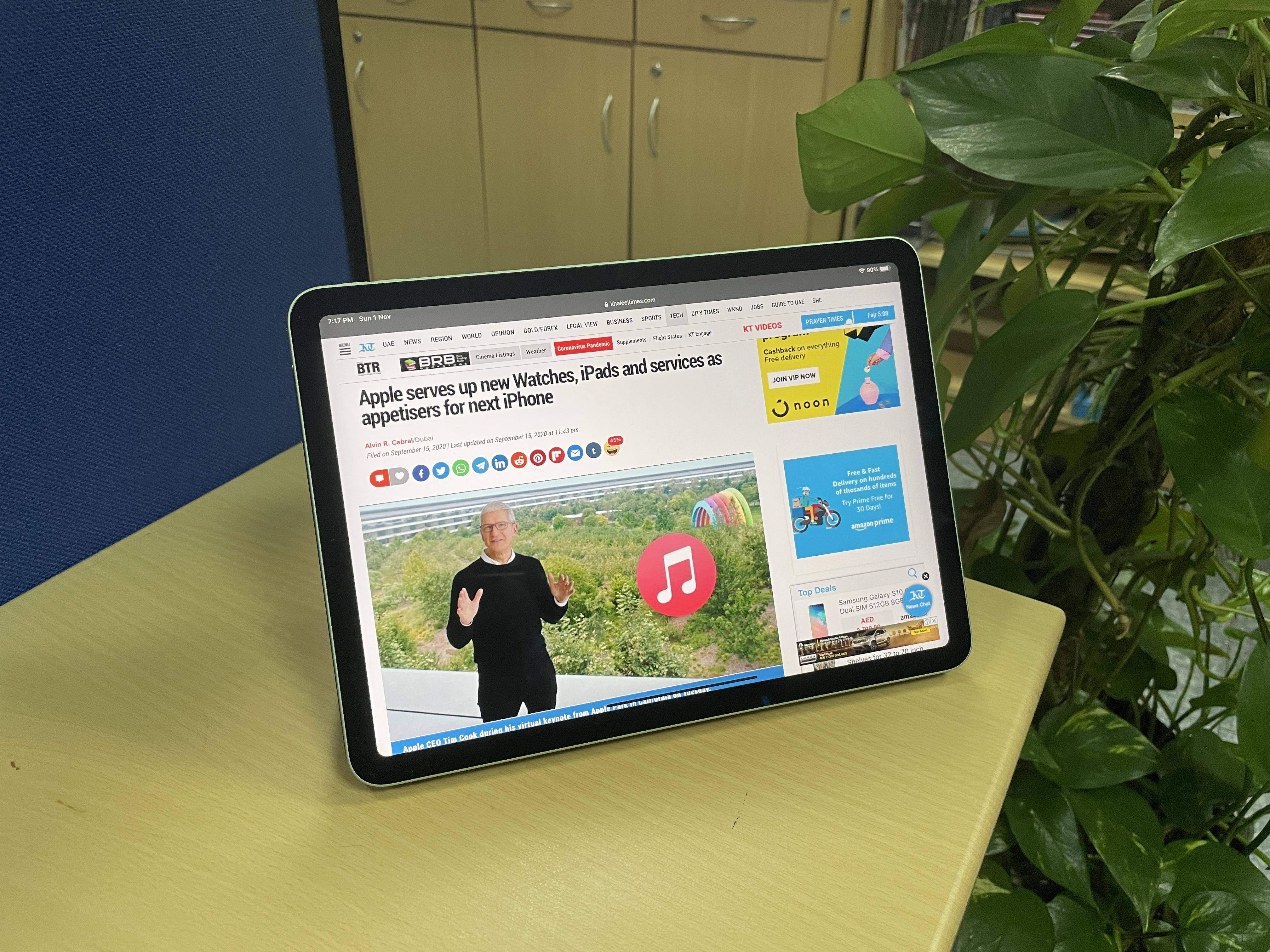 The new iPad Air remains light but in a refreshed design.

Redesigned and re-powered — could this be the best iPad for your buck?


It was a big homestretch for Apple this year, with several hardware launches spanning a couple of months (and with the ‘One more thing’ event next week, it’s all but a foregone conclusion that there’s another one).

The September special event was easily an appetiser to last month’s big iPhone reveal, but in no means was it a pushover: We got new Apple Watches, a new regular iPad and the fourth-generation iPad Air — which we’ll be taking a look at right now.

The new 10.9-inch iPad Air, as its name and reputation implies across Apple’s ecosystem, is a light device; against the latest models, it’s lighter compared to the 11-inch iPad Pro and even the 10.2-inch iPad, but thicker at 6.1mm compared to the former’s 5.9mm (the latter is at 7.5mm; the most recent iPad mini also clocks in at 6.1mm).

As with every other recent and very recent Apple launches, the new iPad Air features a refined design, with geometrical edges that were first seen on the third-generation iPad Pro (which I absolutely adore).

This leaves the eighth-generation iPad — revealed alongside the star of this review — and last year’s fifth-gen iPad mini as the only Apple tablets left sporting the classic look. That kinda wants us to grab one of either to serve as souvenirs from its era, since with the way things are going, that form could be gone soon (unless you count the second-gen iPhone SE; we’re betting the next SE, should it come — considering the uber-cute iPhone 12 mini already exists — would don the curved looks of the X to 11).

In any case, the bezels are still really thick (even for the Pro models). While defined as a full-screen device with the home button gone, imagine how sleeker these iPads would look if the bezels were as slim as those on the iPhones? Doing so will further reduce its size, making it even more compact and lighter. Are the next-gens gearing up for this would-be wonderful change?

Now, a lot of people have been cribbing about the loss of Touch ID, especially in this weird age where Face ID is being rendered inaccessible due to mask requirements. And though Apple ditched the home button on this device, Touch ID lives on not just in spirit but also in actuality, since you can now access it at the sleep/wake button on the upper-right corner (in its default portrait orientation). The volume buttons are just to the right of the sleep/wake/finger button.

You know the drill: Just place a finger repeatedly on it to register your fingerprint and voila. The iPad Air will even recommend you to register a second ’print to make it more convenient for you in the event you’re going to use it in landscape mode (with the Smart Folio, specifically, putting the button on your left). Smart move, since that button isn’t that as easily accessible as the home button before it. It’s an advantage the Air has over even the latest iPad Pros. And you won’t get lost since when you wake it up, a little ‘waving’ sign will tell you exactly where to put that finger.

You don’t, however, get Face ID on the new Air. I’m beginning to sense that once this pandemic gets over (we pray and are optimistic that it’ll be at the soonest, for everyone’s sake), users will then crib about it. Oh, the lovely dichotomy of technology.

Anyway, without the home button, you get to use the swipe gestures from below ala-iPhone. The only difference is that accessing recent apps stacks them side-by-side for full views of each, unlike the overlapping format on iPhones.

And if this is the first time you’re using an iPad or have been a user but have been living in a cave, you’ll notice a dock below — that’s because iPads now run on iPadOS, and version 14 is the latest. A little caution on the dock, though: It disappears when you’re within an app, so to make it appear swipe gently from below; doing so too fast could make you exit the app, or go to recent apps if you hold it too long. There is no option to hide it on the home screen.

Speaking of the home screen, iPadOS 14 — much like its birth pod iOS 14 — introduced new widgets that you can drag to the home screen. Those widgets will be revealed — technically, they’re collectively called Today View — when you swipe right on the main home screen; you can even lock them there by toggling a switch on top. Unlike iOS 14, however, they can’t be placed alongside other apps on the home screens; that would’ve made for good entertainment if you’d like to play an alternate version of Tetris or some jigsaw puzzle.

In any case, those minor blips are all overshadowed by what makes the iPad Air tick: The A14 Bionic chip with Apple’s latest Neural Engine — the same component that makes the latest iPhone 12 devices hum.

We've detailed how the A14 will accelerate your digital performance in our iPhone 12 review. On the iPad, Apple promises a 40 per cent bump-up in performance, 30 per cent better graphics and twice machine-learning performance over last year's iPad Air.

And it shows. The new iPad Air is flawless when you tinker with it, with no lags. Even with the AirPods, its handoff connection happens almost instantaneously.

And as with every iPad, it comes with its own accessories, including the simple Smart Folio cover that allows you to use it in two different standing landscape forms.

It’s also compatible with that gorgeous Smart Keyboard, which comes complete with a trackpad and gives it an even more premium feel (put it this way: It makes the iMac look like an iPad on lots of steroids).

That said, we’re still wondering why the base storage is stuck at 64GB. We’ve pointed this out in our review of the iPhone 12 and 12 Pro recently; apps and files demand more storage, so doubling this will surely make this a better deal. Then again, the argument can be made that for those who’d use an iPad for just enjoying watching stuff on a bigger screen and other non-storage-hungry what-nots, then this is just right, especially if you’re on a budget.

And of course, it’s also compatible with the second-gen Apple Pencil. The company’s drawn a lot more creative users, hobbyists, professionals and goofball wannabe artists like yours truly thanks to the performance this stylus brings. And yet another reason for the flat-edge redesign: The iPad Air happily welcomes the Pencil to rest on it magnetically, and charge it at the same time.

Apple blessed this iPad Air with the same 12MP camera on the latest iPad Pro, but you only get one lens here. The iPad line isn't exactly a photography machine, but it's still a good-specced snapper. Wouldn't it be nice to directly doodle around with a snap right after capturing it?

Both those shots were taken in an area where there's light, but not all that bright. The iPad Air was able to brighten it up a bit, therefore preserving its natural looks. Any camera that doesn't overexpose stuff is good in our book. The lens is up from the previous generation's 8MP with a higher aperture level. The front FaceTime HD camera, however, stays put at 7MP.

The new camera will now also allow you capture videos in 4K at up to 60fps. By default, you capture full-HD at 30fps, but you can alter this in settings. And for more fun, you also get slo-mo and time lapse, but you don't get night mode on the latter just like the one on the iPhone 12 range.

Apple promises up to 10 hours of battery life for the new iPad Air. We’ve never really maxed out in any of our previous iPad reviews when it comes to the advertised figures, but it’s important to note that battery life longevity (obviously) varies depending on what’s being used. This tablet was able to last a shade below eight hours, which saw it used for surfing, working on some documents and intermittent YouTubing.

Speaking of that last one, our standard one-hour YouTube-at-full-brightness test snuffed out 22 per cent from the Air. That’s high at first glance, especially if you’re comparing it to smartphones, but keep in mind that tablets have obscenely bigger screens that require more power.

Now with that USB-C port below, we can find out how long it takes to zap this up to full strength.

Yeah... that took quite some time there. There's no fast-charging capabilities listed, so we'll have to tough this one out to get to full capacity.

Honestly, the fourth-generation Apple iPad Air's strengths can be cornered into two general factors: Looks and performance. And from there, it leaps off, taking the Air line to whole new heights.

The significant internal boosts enables the device to rival even certain laptop segments, and can even give the higher-ups of the iPad line-up a serious run for their money.

But speaking of that, you'd need to pony up a little bit more to get it. Apple, as of late, has been employing a strategy of keeping price tags steady amid a steady stream of upgrades. Methinks we could get this next year, given that the Air was indeed given a major makeover in this round.

Apple’s been aggressively flooding its iPad line-up with several models to choose from. But with every launch, each option gets meaner and better, which makes us wonder if the lines are being blurred now. A more integrated iPad ecosystem in the near future, maybe? And since Apple knocked off the wall plugs in the latest iPhones, we're also expecting the same could be done for the iPads in the future; that would only be a matter of time.

EDITOR RATING: Save for those goofies that are largely ignorable depending where you're coming from, we can sum this up by giving it another name: The iPad Pro lite. 4.5/5