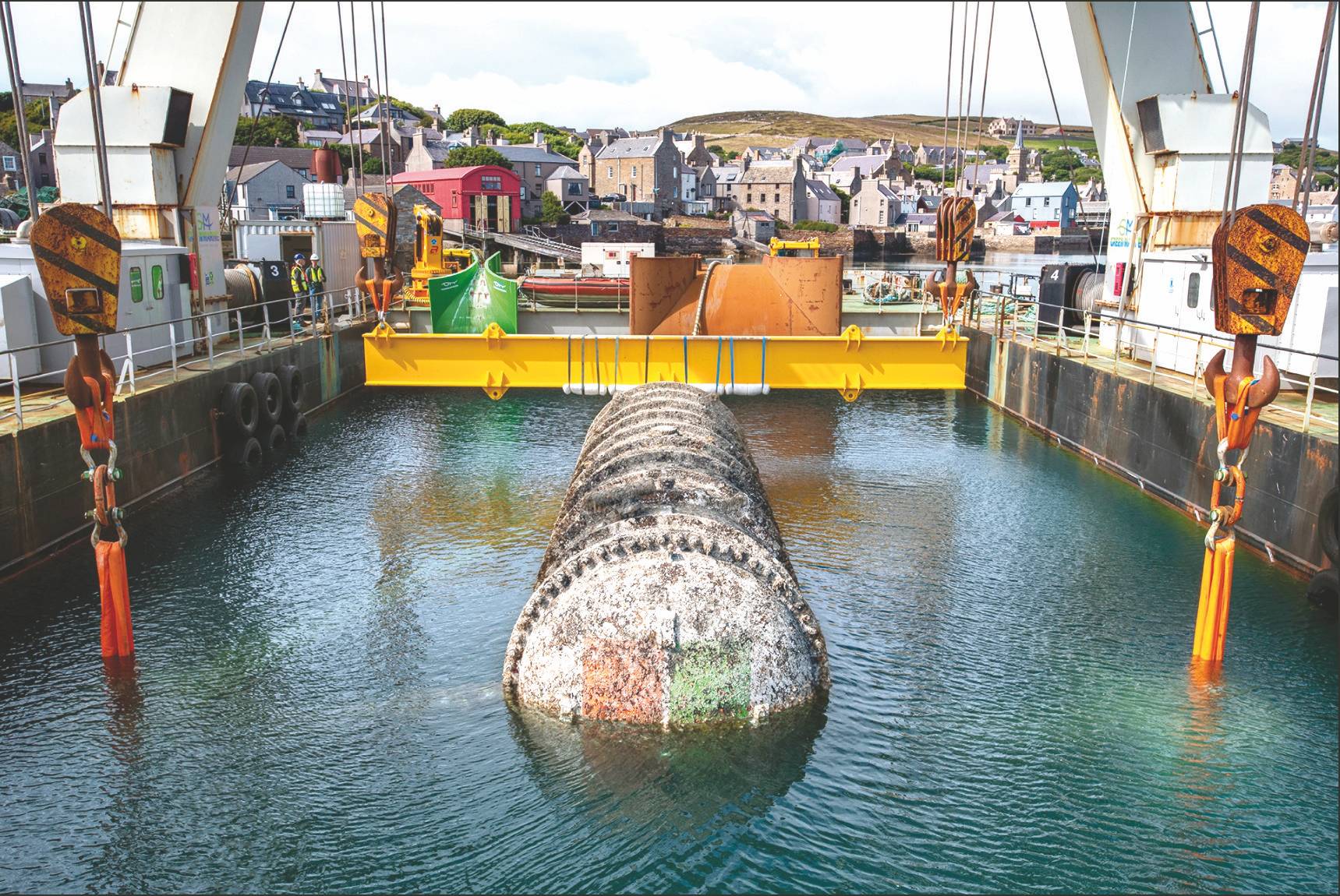 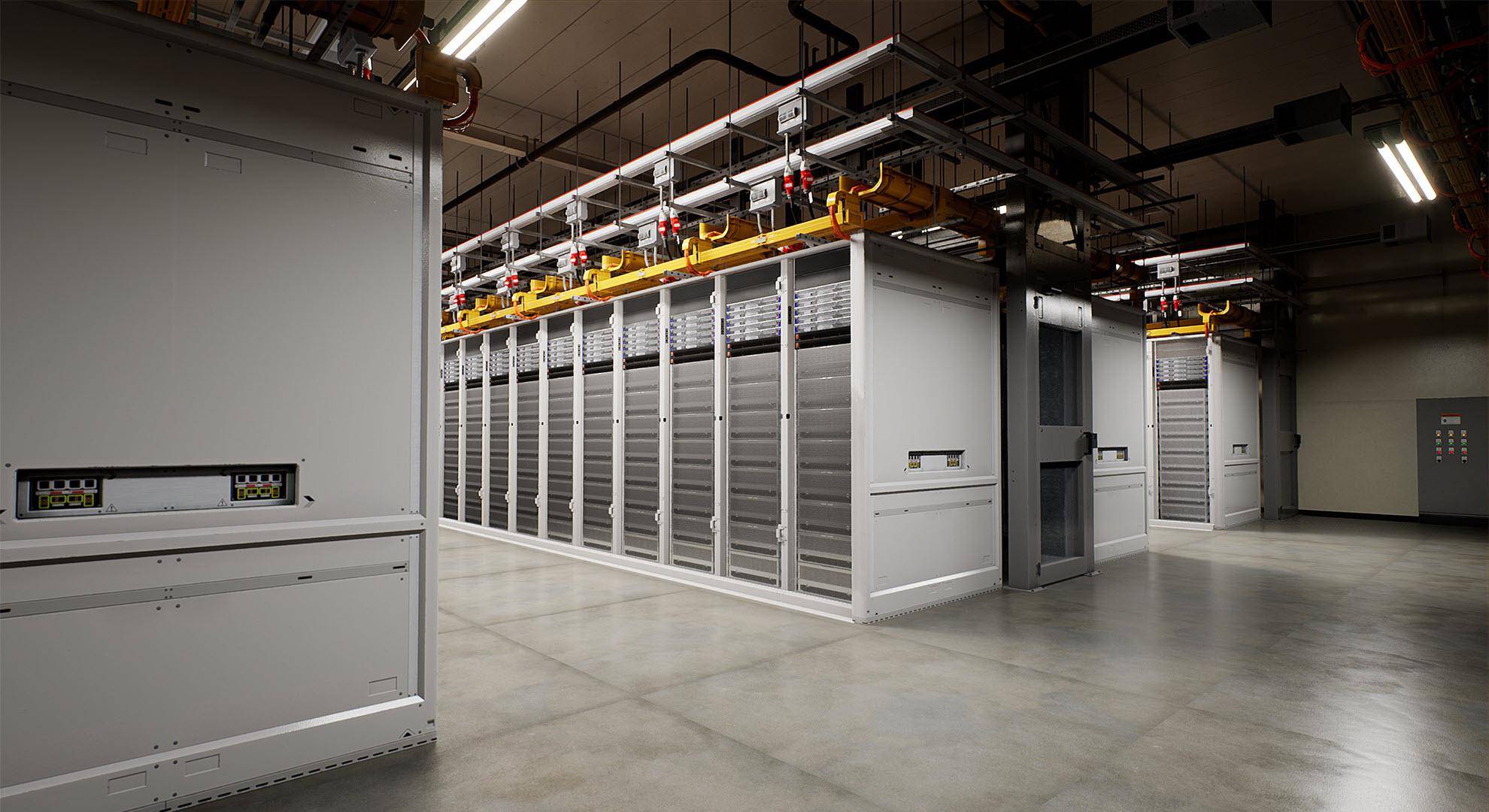 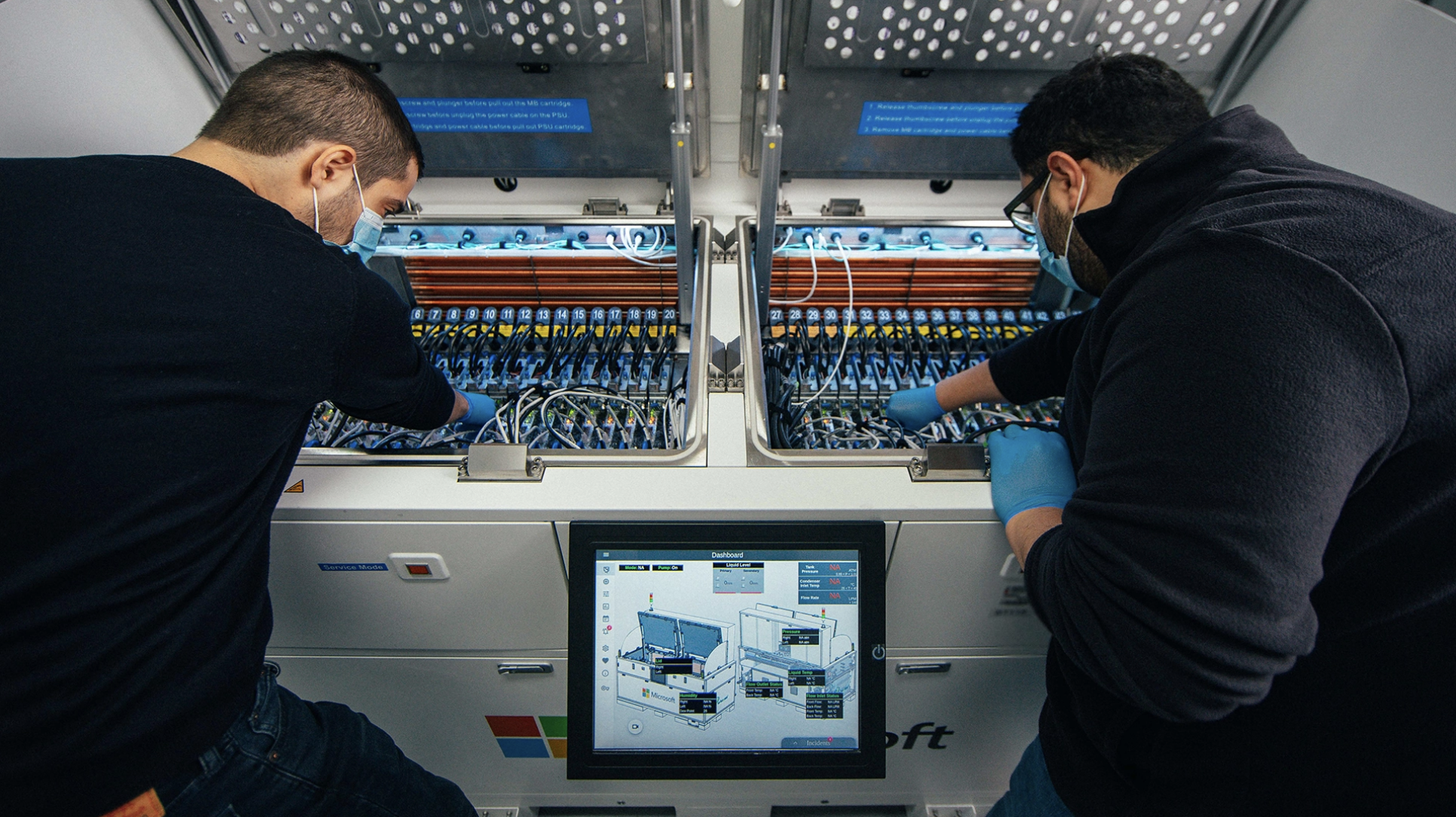 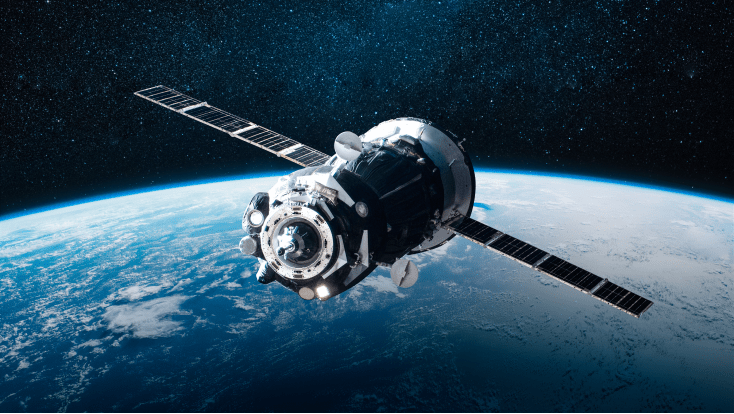 The Northern Isles data centre being retrieved from the seafloor off Scotland’s Orkney Islands, with a coat of algae, barnacles and sea anemones growing on it during its two-year deployment.

One of the key aspects of Microsoft’s highly-secure, intricately-designed data centres is its contribution to the company’s sustainability goals, an aim of which is to become carbon-negative by 2030.

Engineers inspecting the inside of a two-phase immersion cooling tank at a Microsoft data centre.

Microsoft is also using Azure Orbital as a ground station as-a-service that provides communication and control of a satellite.


Millions of people all around the world rely on the cloud to work, study, collaborate and manage critical business applications. Which is why the Covid-19 pandemic, which has thrown the world into chaos, has become the most significant endurance test the public cloud has ever faced.

Data centres, therefore, have become a crucial component in the global cloud infrastructure — and worldwide technology overall — with the unprecedented spike in the use of digital means to communicate.

These structures are “one of the most exciting and most important infrastructural innovations of our time”, said Noelle Walsh, corporate vice-president of Microsoft’s cloud operations and innovation group.

She was speaking during a virtual data centre tour given to Khaleej Times, in which the Redmond, Washington-headquartered bellwether gave a behind-the-scenes look at one of its most sophisticated and highly-intricate structures, responsible for making sure that the endless digital parade is processed in a secure manner and, from a user standpoint, easy-to-manage way.

While data centres have been in the fold for a long time — its earliest form was seen in the 1940s — it wasn’t until Covid struck that brought them into the spotlight and how important its role is in the ecosystem.

Walsh aptly described it in a nutshell, quoting Microsoft CEO Satya Nadella: “We saw as much digital transformation in the first two months of lockdowns as we had previously seen in over two years.”

In choosing the right locations for building a data centre, Walsh explained that customer demand, reliable and stable supply sources, a large pool of qualified talent and renewable energy were the factors that come into play.

Building these in commercial hubs is also a boon for its users: The closer a data centre is to the workloads you’re running, the lower the latency — the delay between a user action and the reaction of a Web application to that — you’ll experience.

And she particularly singled out human talent as the driving force behind all the innovations provided by these centres.

Microsoft’s two data centres in the UAE — one each in Dubai and Abu Dhabi — went online in 2019, the first to be opened in the Middle East. It has made good on its mission to make digital transformation more accessible to any type of business and create about half-a-million jobs across the region.

Microsoft also ensures that it gives back to the community where its data centres are built: From providing community awareness and creating fresh water resources to making high-speed broadband and education programmes available to all, the company does its part to be responsible in economic, social and environmental aspects.

One of the key aspects of Microsoft’s data centres is its contribution to the company’s sustainability goals, an aim of which is to become carbon-negative by 2030. And it has a solid plan to realise this within this decade.

But with this high bar set, they acknowledge that there are more preparations to be done.

“Some of the technology needed to meet these ambitious goals haven’t been developed yet,” Brian Janice, Microsoft’s general manager for energy, said during the tour.

“Which is why the innovation and sustainability pillars need to go hand-in-hand.”

Janice pointed out four key areas that will help Microsoft in this journey, which revolves around energy, ecosystems, water and waste.

By 2025, Microsoft’s data centres would be 100 per cent reliant on renewable energy, and become water-positive, implementing methods such as using alternative ways of cooling its servers to minimise the use of water. On the ecosystem front, it wants to protect more land than it uses for building their structures.

A special focus comes with managing waste. The world becoming more tech-oriented is also resulting in the accelerated rise of electronic waste, and technology firms — under scrutiny for their role in it — are scrambling to reduce this. Apple, for example, started a trend when it stopped shipping wall plugs and headsets with the iPhone 12 series last year.

Microsoft, for its part, has what it calls Circular Centres, where servers — after living out its typical five-year lifespan — are repurposed and recycled.

All these would lead to their ultimate goal of having zero-waste operations by 2030, with at least 90 per cent of its solid waste recycled.

Above, below and beyond

Microsoft’s Project Natick team proved the concept was feasible during a 105-day deployment in the Pacific Ocean in 2015. And in 2020, they reeled up a shipping-container-size data centre coated in algae, barnacles and sea anemones from the seafloor off Scotland’s Orkney Islands; the Northern Isles data centre was plunged 117 feet deep to the seafloor in the spring of 2018, and for the next two years, team members tested and monitored the performance and reliability of its servers.

It was a success.

Going deep also meant going higher — beyond Earth, as a matter of fact: Microsoft is also using Azure Orbital as a ground station as-a-service that provides communication and control of a satellite.

Orbital enables easy and integrated data processing and scale for operations directly from Azure. The data collected from space to observe Earth is instrumental to to help address global challenges such as climate change and furthering scientific discovery and innovation.

“We are populating the globe with edge devices, large and small,” said William Chappell, vice-president of Azure’s mission systems. “To learn how to make data centres reliable enough not to need human touch is a dream of ours.”