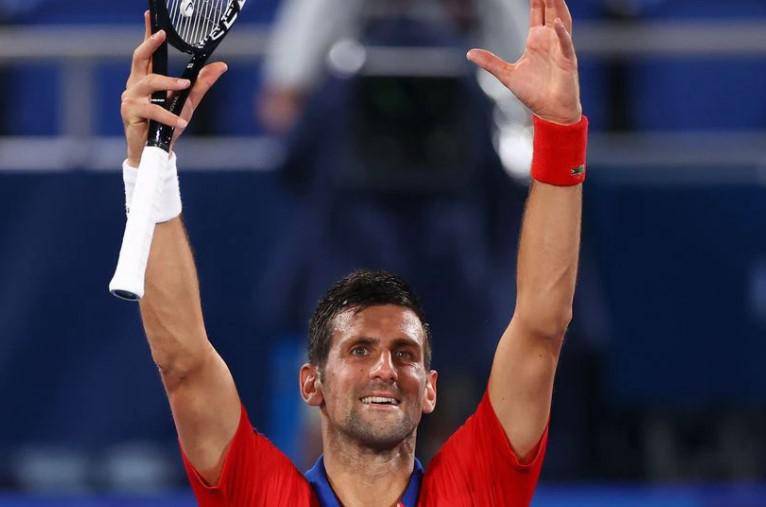 Djokovic holds a 6-2 record over Zverev, his semifinal opponent

In the women's draw, Switzerland's Belinda Bencic set up a final against Naomi Osaka's conqueror Marketa Vondrousova with a marathon victory over Kazakh Elena Rybakina.

World number one Djokovic, who has already sealed the Australian Open, French Open and Wimbledon titles this season, brushed aside Nishikori 6-2, 6-0 in just 70 minutes.

Here’s a look at the rankings to date. Follow @ktimessport for more updates. pic.twitter.com/KluRnjABtr

"My best performance of the tournament tonight against a very good, very good opponent," said Djokovic, who is looking to emulate Steffi Graf's 1988 Golden Slam -- winning all four majors and the Olympic singles in the same year.

"I feel I had an answer for everything he had."

The Serb did not have to be in peak form against an opponent who offered very little and made 16 unforced errors.

The 34-year-old Djokovic, whose best Olympic result was a bronze medal in Beijing 13 years ago, will face German Alexander Zverev in the last four on Friday after the fourth seed's 6-4, 6-1 win over Jeremy Chardy.

Djokovic looked comfortable throughout against Nishikori, with the match played in cooler conditions than earlier rounds after he and Medvedev were among players to lobby organisers to change the schedule. The day's start time was pushed back from 11:00 am local time (0200 GMT) to 3:00 pm.

"It's great that we're playing in the afternoon hours, so we don't experience too much heat, although it's still very, very humid," he added.

Djokovic will now be the hot favourite to reach the final for the first time.

He holds a 6-2 winning record over Zverev and has beaten the world number five in their last five meetings.

'I wanted to change my skin'

The top seed could still win two golds in Tokyo, after he teamed up with Nina Stojanovic to reach the mixed doubles semis, beating Germany's Kevin Krawietz and Laura Siegemund 6-1, 6-2.

Djokovic's path to singles glory was made easier when second seed Medvedev was dumped out by Pablo Carreno Busta.

Spaniard Carreno Busta, on his Olympic debut, set up a semifinal with another Russian, Karen Khachanov, by beating an out-of-sorts Medvedev 6-2, 7-6 (7/5).

Medvedev, a two-time Grand Slam finalist, made 26 unforced errors as he struggled to find his usual rhythm, smashing his racquet in frustration at the end of the match before again complaining about the heat.

"I wanted to change my skin because I was sweating like I never did before. It was terrible," he said.

Gold medal round is set

Earlier ninth seed Bencic, who also reached the women's doubles final with Viktorija Golubic, had to dig deep to edge out Rybakina after playing for two hours and 44 minutes in the searing heat first up on centre court.

Vondrousova, the 2019 French Open runner-up, stands in her way on Saturday after again impressing against a high seed by thrashing Elina Svitolina 6-3, 6-1.

"I don't feel pressure right now. I just feel joy to have a medal," said an emotional Bencic.

The men's doubles final will be just the third Olympic final between the same country -- with Croatia's Marin Cilic and Ivan Dodig to play compatriots Nikola Mektic and Mate Pavic on Friday.