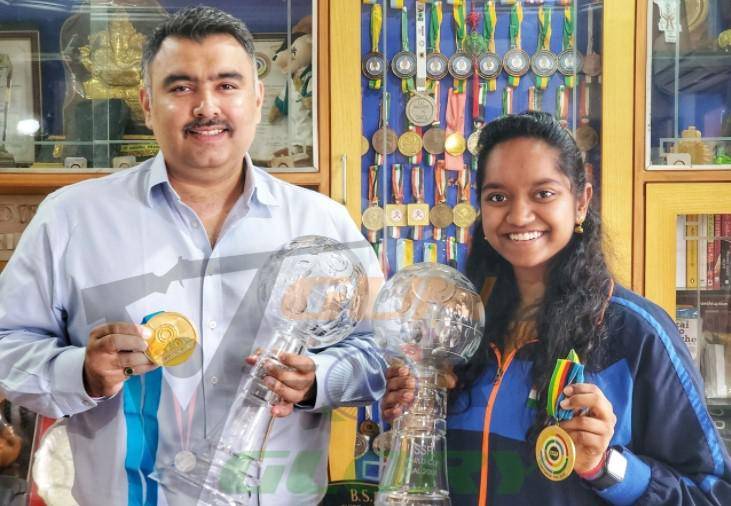 
Entering the Tokyo Olympics on the back of an unprecedented run that began sometime after the inexplicable meltdown in the 2016 Rio Games, Indian shooters have a great chance to win medals in Japan.

All of the 15 shooters are capable of winning medals in the shooting events that start on Saturday.

One among them is the highly-skilled Saurabh Chaudhary, who will have a few Olympic and world champions standing in his way to glory at sport's biggest showpiece.

Alongside Abhishek Verma, Chaudhary will be part of the first competition day action in the men's 10m air pistol event.

The fate of Apurvi Chandela and Elavenil Valarivan -- in the women's 10m air rifle event -- will also be decided on Saturday.

Both Chandela and Elavenil will enter the competition with plenty to look forward to, despite the occasional blips here and there.

Chandela, the three-time ISSF World Cup gold medallist, has endured a bit of a rough time in the run-up to the Games, having contracted Covid-19 and then testing negative just in time to board the flight for the Indian team's training-cum-competition tour of Croatia.

It will be her second Olympics and she will look to exorcise the Rio demons when a foot injury ended her hopes in 2016.

The 21-year-old Elavenil, world number 1 and one of India's finest rifle shooters, will certainly fancy her chances.

What could aid her is that she has been trained by Olympics medallist Gagan Narang for the past seven years.

Meanwhile, Chaudhary has entered Tokyo as one of the hot favourites to win a medal.

Whether one gives him the favourites tag or not, it hardly matters to the boy who used to shoot for fun in his village fares while chewing gums.

Ahead of the world's biggest sporting event, Chaudhary remains focused on trying to keep things simple and sticking to the basics to hit the bull’s-eye in his maiden Olympics.

On the second day of the competition, India will have the sensational Manu Bhaker and the hard-working Yashaswini Singh Deswal representing the country in the women's 10m air pistol competition.

The women's 10m pistol event has attracted a maximum number of entries, but that should not worry the two talented Indian shooters.

In the men's 10m air rifle event, India will have Divyansh Singh Panwar and the experienced Deepak Kumar. The former is a strong contender after his superb run of form since breaking into the senior team in 2019.

If these eight participants find their top form on the first two days, India can expect a handful of medals at the Games.

In the middle and towards the end of the shooting events, India have strong contenders in the form of Rahi Sarnobat, Aishwary Pratap Singh Tomar, Anjum Moudgil, Tejaswini Sawant and the seasoned Sanjeev Rajput, besides the two skeet shooters in Mairaj Ahmad Khan and Angad Vir Singh Bajwa.

The likes of Sarnobat, who has won a silver and gold in the ISSF World Cups, world number one in 10m air rifle, Divyansh Singh Panwar, and Aishwary Pratap Singh Tomar are all gunning for medals.

Only 18, Panwar has already won over six gold medals in international events so far.