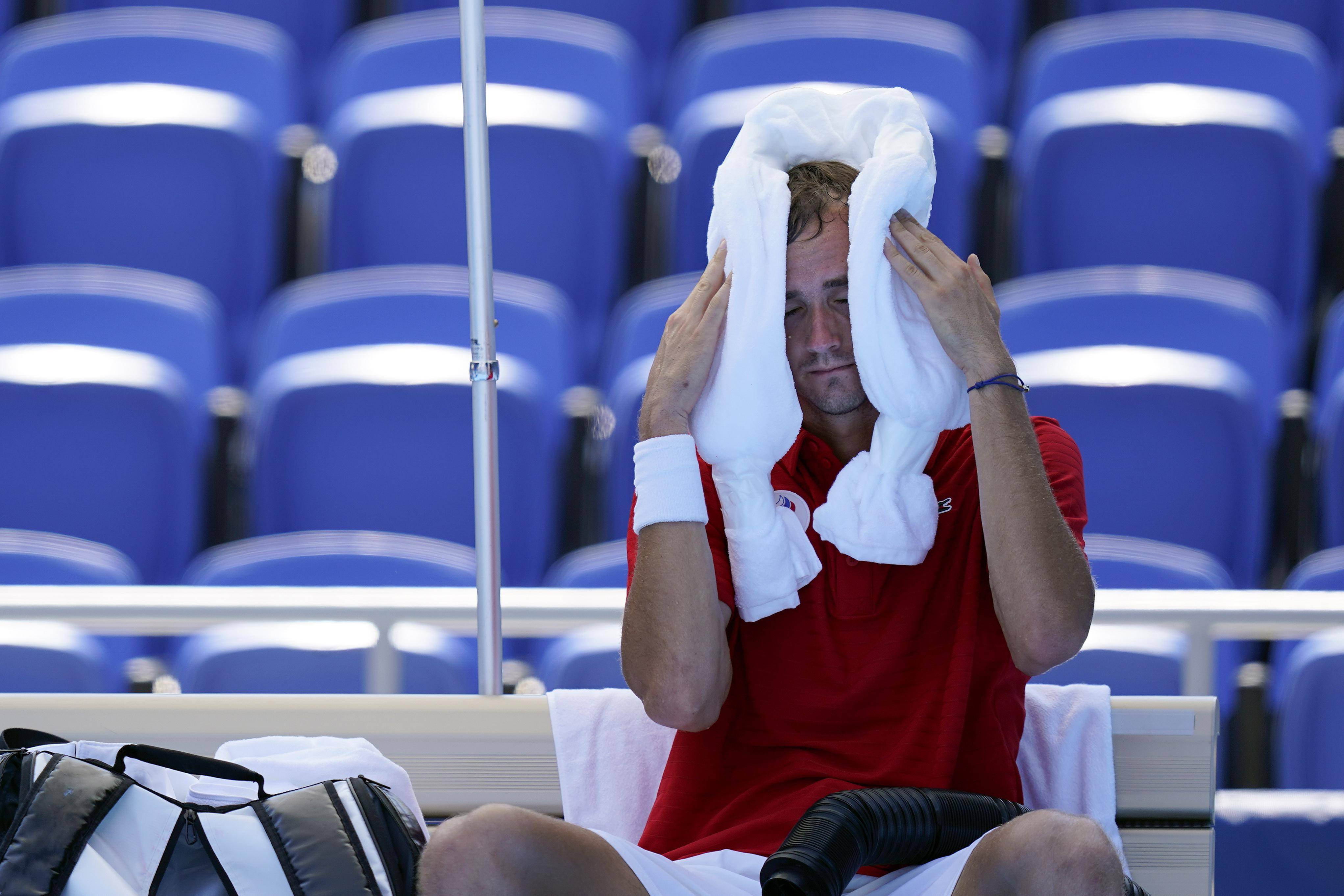 Daniil Medvedev, of the Russian Olympic Committee, cools off during a changeover in a tennis match against Alexander Bublik, of Kazakhstan. — AP


French Open finalist Anastasia Pavlyuchenkova grasped for an air tube during a medical timeout and grew frustrated at the lack of ice in a court-side container.

German player Mona Barthel struggled with 10 double-faults in a loss to Iga Swiatek as a blinding sun made it nearly impossible to see the ball once she tossed it.

Heat and humidity quickly became a major issue when the Olympic tennis tournament opened Saturday. The temperature soared to 93 degrees F (34 degrees C) and the heat index made it feel more than 100 F (38 C).

“You’re just not feeling great,” Pavlyuchenkova said. “So I wasn’t enjoying it at all.”

Meanwhile, Novak Djokovic’s bid for a Golden Slam is alive and well following a routine 6-2, 6-2 win over 139th-ranked Hugo Dellien of Bolivia.

The top-ranked Serb is attempting to become the first man to win all four major tennis tournaments and an Olympic singles gold medal in the same year.

“You feel constantly dehydrated,” said Djokovic, who at least played later in the day when half of the court was in the shade. “There’s no circulation of the air.”

Midway through her second set, doubts started to creep into Pavlyuchenkova’s head as she shoved bags of ice up her skirt on a changeover. Then she had trouble fiddling with a tube blowing cold air next to her seat.

“It’s not easy to find the right position because it’s just on the bench and somebody has to hold it so the air is blowing on you,” the Russian said.

Second-seeded Daniil Medvedev, who also competes for ROC at the Tokyo Games, called it “some of the worst” heat he has played in after eliminating Alexander Bublik of Kazakhstan 6-4, 7-6 (8).

“But you have to play,” Medvedev said. “That’s the Olympics, you go for the medal. You are not here to cry about the heat.”

Medvedev suggested that organizers move all matches to the evening to avoid the heat of the day.

“I don’t think they are going to change anything in the middle of the tournament, but that’s what can be done,” he said. “The fact that we have only one minute between the changeovers is a joke. ... It should be 1:30 like it is in other tournaments.”

“I sincerely don’t understand it,” Djokovic said, adding that later starts would also better suit broadcasters in the United States and Europe because of the time difference.

“Every time I had to take the ice pack or ice towel it wasn’t cold at all,” Pavlyuchenkova said. “They expected the heat and it wasn’t 100% ready for us.”

Pavlyuchenkova needed more than an hour after her match to recover before talking to reporters.

“I feel a bit better, but I just have a massive headache now,” she said. “I think they somehow could have tried to make it a bit easier.”

On one occasion, Barthel lost sight of the ball completely on her serve.

“I was blinded by the sun,” the German player said. “I couldn’t see it anymore.”

There are rules for extreme heat that call for a 10-minute break between the second and third sets if players request it. Play can also be suspended if an internal advisory group deems conditions dangerous — in which case play would continue on center court under a retractable roof.

Aiming for his fourth Olympic medal, Andy Murray and British partner Joe Salisbury beat the second-seeded French team of Pierre-Hughes Herbert and Nicolas Mahut 6-3, 6-2 in doubles. Murray is the two-time defending Olympic champion in singles and he won a silver in mixed doubles at the 2012 London Games with Laura Robson.

Also advancing in singles on the hard courts of the Ariake Tennis Park were eighth-seeded Barbora Krejcikova of the Czech Republic, 14th-seeded Maria Sakkari of Greece, 16th-seeded Elena Rybakina of Kazakhstan and Viktorija Golubic of Switzerland.

Djokovic’s next opponent will be 48th-ranked Jan-Lennard Struff of Germany, who eliminated Thiago Monteiro of Brazil 6-3, 6-4.

Golubic will next face either home favorite Naomi Osaka or Zheng Saisai of China.

The Osaka-Zheng match was originally scheduled to open play on center court, but that was moved to Sunday before Osaka lit the cauldron in Friday’s opening ceremony.