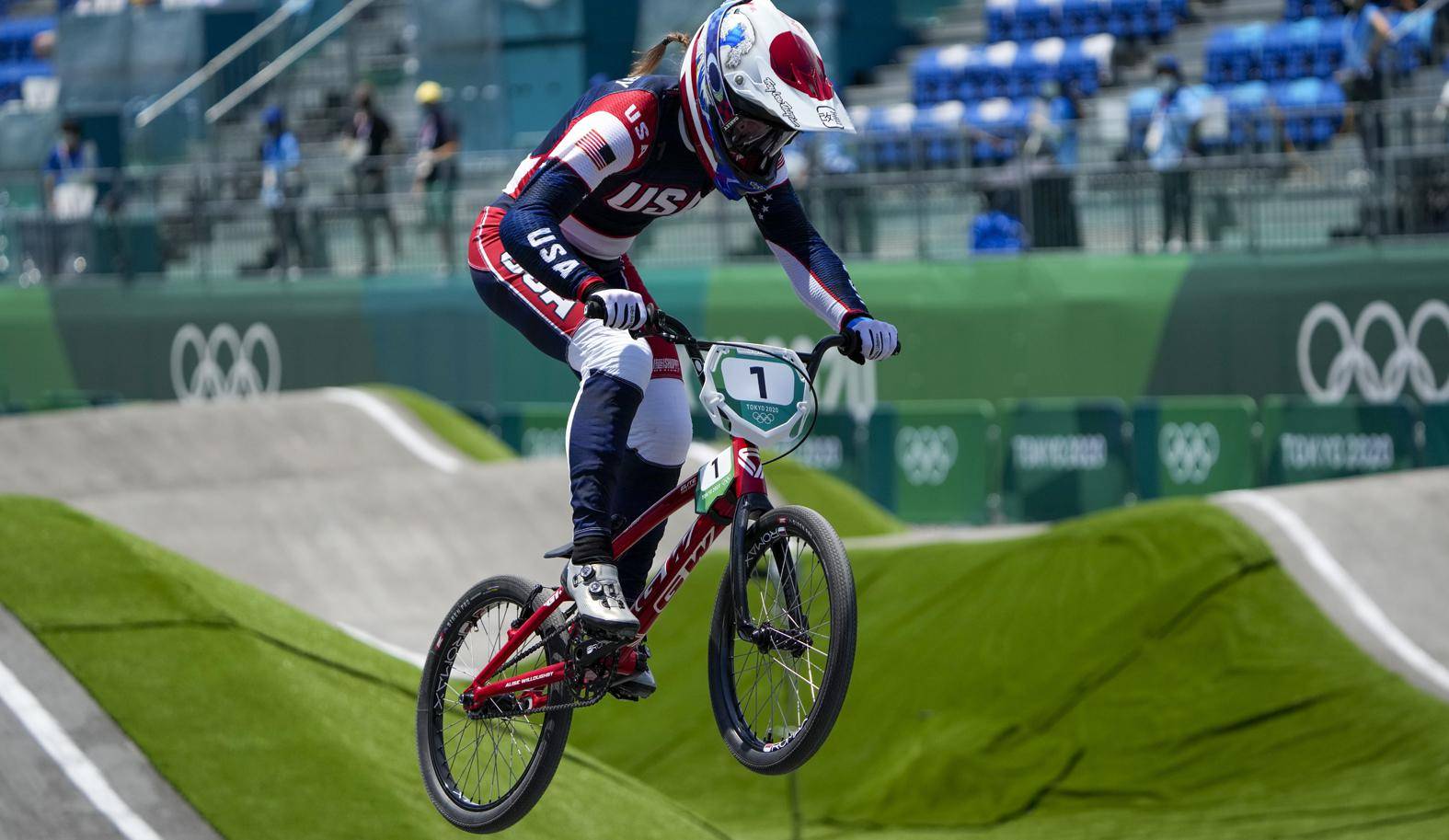 Alise Willoughby of the United States competes in the women's BMX Racing quarterfinals at the 2020 Summer Olympics. — AP

Disappointing, but OK. The couple has been through worse before

An accident. An encounter with a man named Bootie. A walk at a wedding.

Every life has its trajectory-altering events, sometimes in a split second. They are rare, maybe just once across the span of a lifetime.

Sam Willoughby had three in 15 months.

The accident left him paralysed. The talk with Bootie pushed him away from the darkness. The walk across the altar carried him closer to the light.

His wife, American BMX racer Alise Willoughby, has been with him every step of the way.

“I am proud that together we have developed a skillset to overcome anything and work through our challenges together,” Sam said.

Once one of the most dominant BMX racers in the world, Willoughby was in Tokyo to coach Alise, currently one of the world’s best.

Alise was one of the 24 women BMX racers to qualify for the Tokyo Games, though it didn’t end well — she crashed twice in three semifinal runs and didn’t make it to the final.

Disappointing, but OK. The couple has been through worse before.

“Sport is not always very fair. It’s harsh,” she said after the second crash. “I put everything I had out there. I’m 150% proud of the effort put forth.”

Their relationship began as an infatuation, an up-and-coming rider from Australia seeing an American girl named Alise Post in BMX magazines and DVDs.

They met a few times at world championships and he later moved to America to pursue his racing career, living for a time with Alise’s family in St. Cloud, Minnesota.

They hit it off and raced away from there, becoming the royal couple of BMX racing, racking up Olympic medals, world championships.

When Alise had her own life-altering moment — the death of her mother — and a series of serious injuries, Sam helped pull her through it.

Then came the crash, altering Sam’s life arc, Alise’s with it.

Despite riding with a damaged ACL, Sam took sixth at the 2016 Rio Olympics. The performance gnawed at him, so he stuck around the training center in Chula Vista, California, to sort out what went wrong while Alise headed to Minnesota for a charity race.

Sam was just warming up, yet BMX can be an unforgiving sport, even with the most minor of mistakes. His back tire caught a hump in a rhythm section, throwing his bike upside down and Sam onto his head.

Expecting to feel the wind knocked out of him, Sam couldn’t feel his legs.

Alise raced to California, arriving as Sam was waking up from surgery. He had broken three vertebrae, told by doctors he would never walk again.

Sam went hard at rehab, as he does in everything. Internally, he struggled in the darkness of depression, an elite athlete no longer able to soar.

Bootie banked Sam and Alise toward a better future without even trying.

Sam’s brother, Matt, flew from Australia and, trying to get Sam out of the house, took him to a NASCAR race in Fontana, California, where they met Barker.

Robert “Bootie” Barker had been paralysed since a car accident his senior year in high school and never let it slow him down, building a career as a NASCAR crew chief.

Barker was surprised how well Sam looked seven months after the accident and complemented him. He couldn’t know how much the smile, flowing mane of hair and muscular upper body hid what was happening inside.

They talked, mostly about racing, how Barker navigated a life that was still new to Sam.

Barker, in his Virginia twang, also hit Sam the kind of bluntness he needed, telling him to move forward with his life, and not look back.

“It wasn’t centred in the negative,” Barker said. “It was more about the future, the possibilities. After the fact, I realized he needed to hear those things, somebody focused on get what you want to get done, not get hung up on what’s holding you back now.”

Barker didn’t know it at the time — he was just being his usual honest self — but the conversation sent a jolt through Sam.

He had been thinking about coaching Alise and finally brought it up. She agreed, believing his analytical approach to racing would be a complement to her aggressive, animalistic racing style (she’s nicknamed “The Beast”).

Armed with a newfound purpose, Sam barrelled headlong into coaching like he did hitting hole shots as a rider, helping Alise with every aspect of her career — driving her equipment to the track, pushing her in workouts, making her lunch.

“Meeting Bootie opened my eyes to the possibility of living a life without limitations,” Sam said.

Then, a wedding and a walk.

Right after his accident, doctors told Sam he would be a quadriplegic, have the independence of a 2-year-old. Sam worried about being a burden to Alise and his family, yet continued to push hard in rehab.

Helped by the big mental shove from Barker, he thrust himself another step forward at his wedding, honouring a promise he made to Alise by walking with the assistance of a walker and braces.

The ceremony solidified their already unshakable bond. The walk was another step that carried Sam and Alise all the way to the Tokyo Olympics — even if it didn’t turn out as they envisioned.

“This one will sting for a while, but if there is one thing we have learned together, it’s that the sun comes up the next day and it can always be worse,” Sam said.

Whenever the next moment comes, if it comes, Sam and Alise will be ready. They’ve already been through so many together.