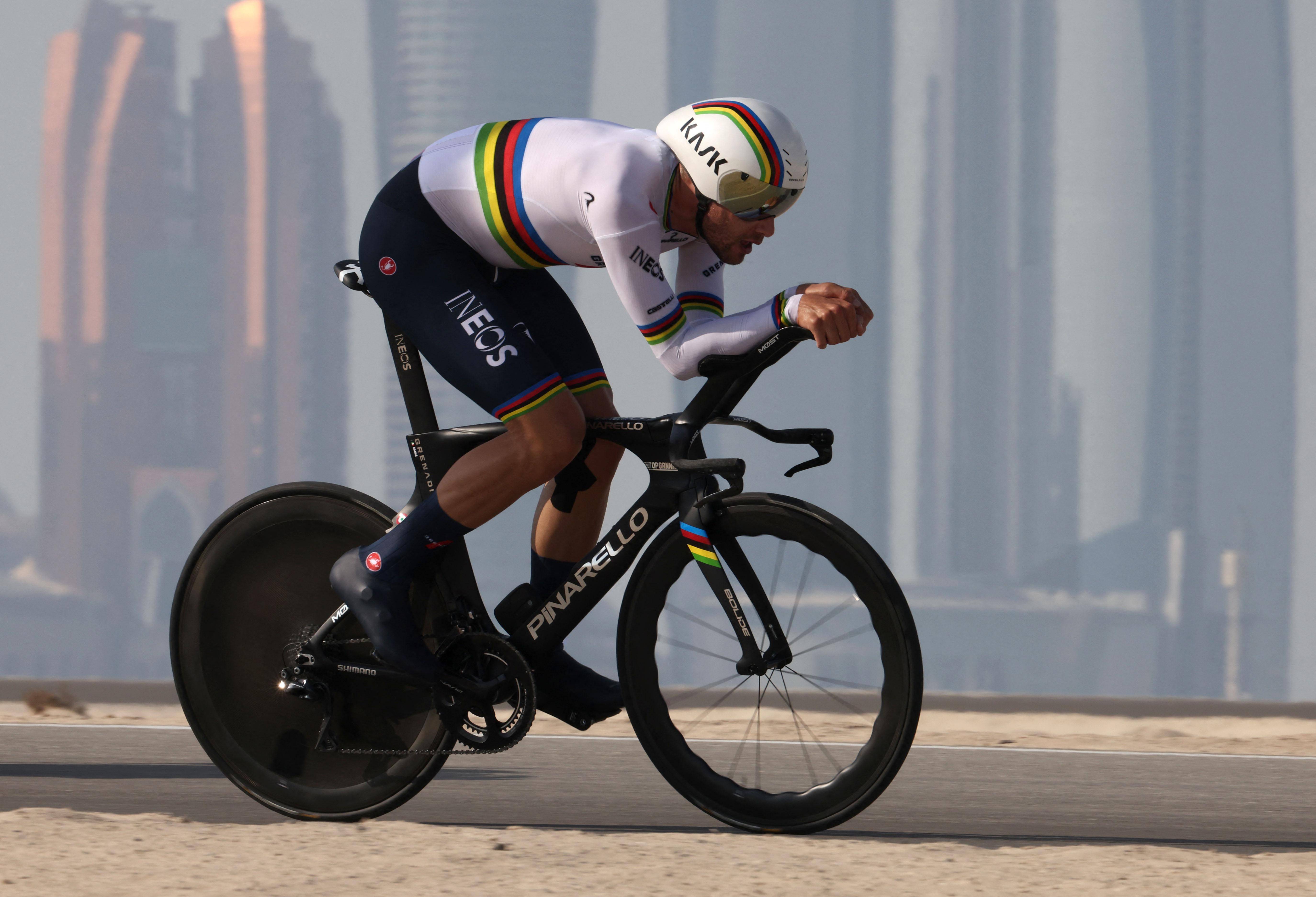 Ganna was pleased with the stage win on Monday.

Filippo Ganna did what he does best. The Italian ensured normal service resumed after a dramatic start to the day saw Mathieu van der Poel give up the leader’s red jersey following Alpecin-Fenix’s withdrawal from UAE Tour.

The Belgium-based team decided to withdraw from the high-profile event after a team staff tested positive for Covid-19.

But not even a tsunami could have swept away Ganna on Monday as the 24-year-old Italian star, who wears the colours of Ineos Grenadiers, rode the wave of his talent to claim his eighth consecutive time trial victory, keeping the staggering year-long unbeaten run in his specialty intact.

The ruthless display helped Ganna clinch the second stage of the UAE Tour -- Abu Dhabi Sports Council Stage – as he got the better of Stefan Bissegger of EF Education-Nippo and Mikkel Bjerg of the UAE Team Emirates on Al Hudayriyat Island.

“I am really happy with this result, achieved in this amazing Rainbow Jersey. Every ITT is a different race, it is never easy. Some people think that because I am the world champion, ITTs are easy for me, but it's not like this, every new race is a new test,” said Ganna, a four-time world champion in the individual pursuit.

It was a stage that saw several riders clock impressive time, but no one other than the brilliant Ganna (13-56) could go under the 14 minute mark on Monday.

“Today I did a good performance, the next time I’ll be doing one will be at Tirreno-Adriatico. Yesterday we had to stop for 'physiologic needs' and then the echelons started,” he said.

“Luckily we had Adam (Yates) in the front, we hope he can claim back the Red Jersey that he won last year. The wind will still play an important role in this race, many things can still change. My focus now is to help Adam (Yates), especially before the climbs begin.”

Yates, the British rider who held the red jersey until the Covid-19 outbreak forced the cancellation of the 2020 UAE Tour, would be facing a massive challenge in the race for the overall leader this time.

In front of him is Tadej Pogacar, the UAE Team Emirates star and the winner of the 2020 Tour de France.

Having finished fourth in the second stage on Monday, the Slovenian icon now in the driver’s seat, as the overall leader enjoys a five second lead over the second-placed João Almeida, the Portuguese cyclist who races for Deceuninck - Quick-Step.

"I knew before the time trial that my shape is good at the moment and in the end, I did a really good time trial and I’m super happy with the result. Having the leader’s jersey is very good for us,” Pogacar said.

“We can go into the upcoming stages with confidence. It was pan-flat today but I actually like that a lot. I train on the flat just as much as on the mountains. Sometimes I prefer the mountains but sometimes I also enjoy riding on the flat, especially in time trials, which is a very nice discipline. I really like to race on the TT bike.

“Today, I was more focusing on myself and doing the best time I could than focusing on Joao Almeida’s abilities. It did matter to me though before the start how good he’d do. I knew he’d be good. As for me, I actually didn’t expect anything. I was just riding for myself. I think I’ve just done my best TT - for this short length. It was a really good performance from my perspective.”

But Pogacar refused to get carried away despite the five-second advantage over his nearest rival.

“Five seconds lead over Almeida is not a lot but it is an advantage. I’m in the defending position and he needs to attack. It’s easier to control than to have to make up time. But there are still five stages left and many things can happen,” he said.

Now as the riders brace for Tuesday’s grueling climb to the finish-line at Jebel Hafeet for the third stage honours, Pogacar is hoping his experience of riding in those mountains will help him.

“Tomorrow it’s the hardest mountain-top finish. I hope for the best legs I can have.

It is a bit of an advantage to know Jebel Hafeet well from last year and from our training camps over here but up the hill, it’s a matter of power more than knowledge of every metre of the climb. At the top, the best rider wins. I just want to be first at the top,” he said.