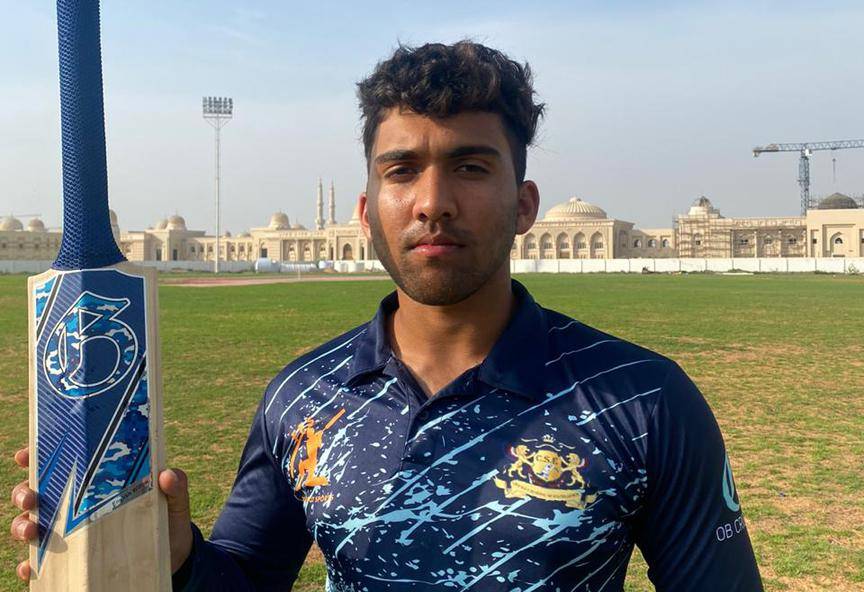 Ali Shan Sharafu’s sublime innings saw him vault to third in the top scorers in the League with 282 runs. — Supplied photo

The Cricket School Of Excellence pupil smashed 155 runs off 83 balls in the U-19 UAE Academy League organised by the Emirates Cricket Board.


UAE’s young and rising star Ali Shan Sharafu was relieved to have the monkey off his back and he did that in stellar fashion, by shattering his own record in the process.

The 17-year-old, who has represented the UAE at the Under-19 level and who made his debut with the UAE senior National team in February, had been going through a lean patch in the ongoing Under-19 UAE Academy League organised by the Emirates Cricket Board (ECB).

The Cricket School Of Excellence pupil had only one half-century in five innings to show until last Friday when he cracked a record 155 against Maxtalent Cricket Academy last Friday. Sharafu’s blistering knock came from just 83 deliveries and was garnished with a whopping 12 sixes and nine boundaries.

Sharafu, who was just 15 when he made his Under-19 debut in 2018 and made the cut with the senior team at the Western Region Asia Cup T20 Qualifier in Muscat, Oman, eclipsed his own mark of 151 which he had scored against Young Talents Cricket Academy in 2018.

It is a new record in the Under-19 UAE Academy League. Twelve academy teams from across the UAE are taking part in the tournament. “It feels good (to break the record,” Sharafu told the Khaleej Times. “I was a bit short of runs in this tournament. I only had like one fifty out of four or five games. So, I had to get a big score to come back on track. So, it felt nice after getting that,” added the opener.

Riding on Sharafu’s special, Cricket School Of Excellence racked up 282 in their 30 overs after being told to take first strike. The bowlers then did their job as Maxtalent Cricket Academy were bundled out for 135, with Zuhaib Zubair snaring three wickets, while Hussain Khan, Trish Shetty and Rounak Pandey picked two wickets each.

Sharafu’s sublime innings saw him vault to third in the top scorers in the League with 282 runs. Kings Academy’s Aryan Lakra, UAE’s Under-19 captain, leads with 387 runs followed by Sharafu’s teammate Punya Mehra, who has 317 runs so far.

And Sharafu is delighted with the path of his cricketing journey. “I was the youngest at Under-19 and also the youngest with the senior team. The experience was great, there was a lot to learn from the senior players who have played for so many years. It is great to be part of the squad and also we won that tournament and we qualified for the next qualifiers in Malaysia,” said Sharafu.

The Asia Cup T20 Qualifier was scheduled to be held in Malaysia in August but was postponed because of the Covid-19 pandemic.