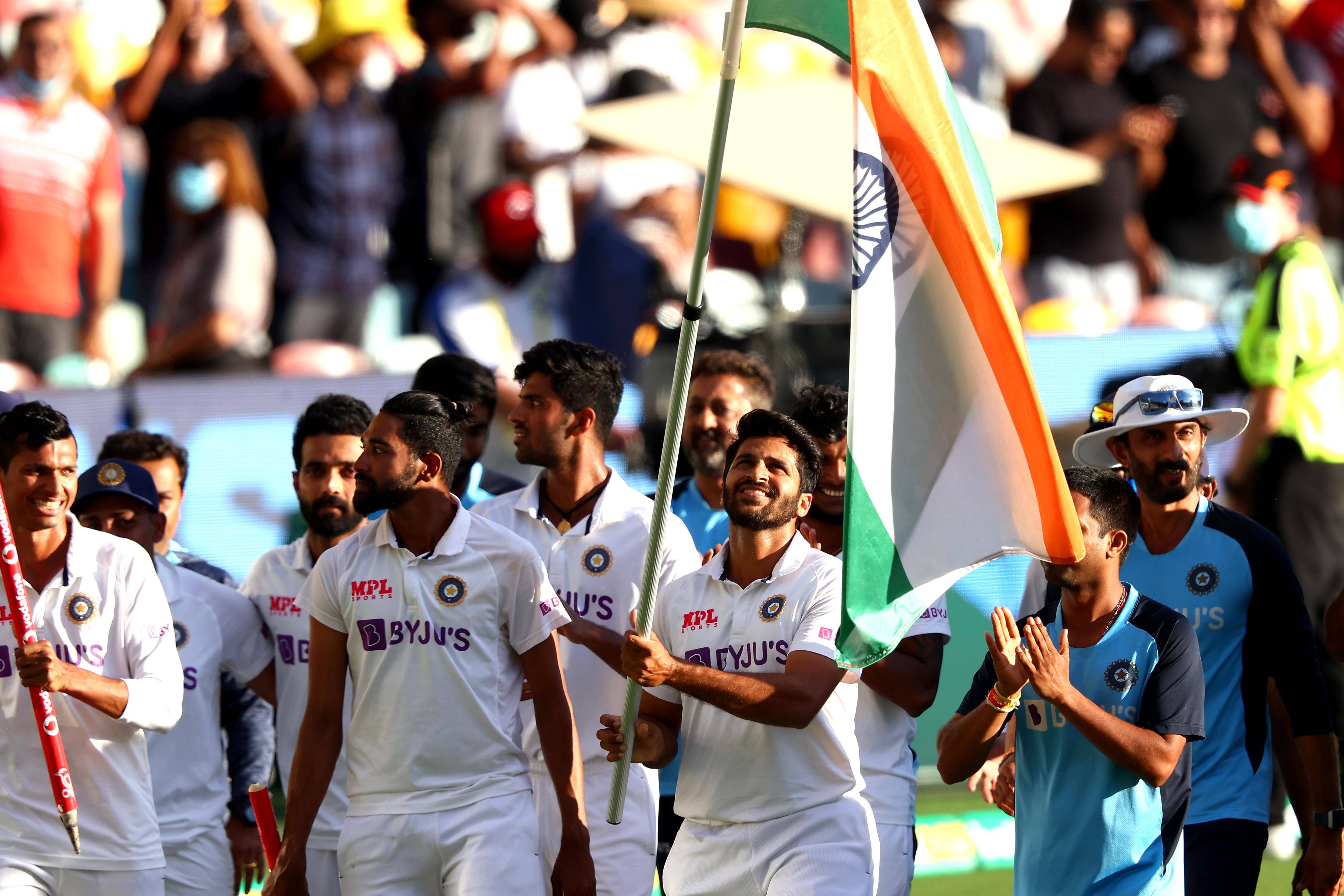 Indian players celebrate the victory in the fourth cricket Test match against Australia at The Gabba in Brisbane.

After India’s historic and epic Test and series win against Australia that brought tears of joy and goosebumps, the cricketing world as well as the world of football heaped praise on the team’s stellar exploits Down Under, on various social media platforms.

“WHAT A WIN!!! Yessssss. To everyone who doubted us after Adelaide, stand up and take notice. Exemplary performance but the grit and determination was the standout for us the whole way. Well done to all the boys and the management. Enjoy this historic feat lads. Cheers @BCCI” Kohli wrote on Twitter.

Batting legend Sachin Tendulkar wrote: “Every time we got hit, we stayed put & stood taller. We pushed boundaries of belief to play fearless but not careless cricket. Injuries & uncertainties were countered with poise & confidence. One of the greatest series wins! Congrats India.”

Meanwhile, former India captain and BCCI president Sourav Ganguly wrote: “Just a remarkable win...To go to Australia and win a test series in this way ..will be remembered in the history of Indian cricket forever ..BCCI announces a 5 cr bonus for the team ..The value of this win is beyond any number ..well done to every member of the touring party..”

Former Indian middle-order batsman VVS Laxman wrote: “Historic series win for Team India! Youngsters delivered when it mattered, with Gill and Pant in the forefront. Hats off to Ravi Shastri and the support staff for their part in this turnaround! So so proud of this bunch, this is one for the ages #AUSvsIND”

Former Indian opener Virender Sehwag said: “India had many players injured, but what has been injured more has been the Australian arrogance & pride. The test series has been like a movie with every member of Indian Team being a hero & some of them Superheroes.”

@BCCI That’s one of the best series wins I can ever remember on Aust soil & to do it after being bowled out for 36, plus a depleted squad-shows tremendous character, resilience, courage & belief. Just fantastic @RaviShastriOfc @ajinkyarahane88

England pacer Stuart Broad said: Test cricket’s heart is beating strongly! That was an extraordinary win @BCCI & a fantastic series to watch. Aussies not lost at The Gabba since 1988. Wow”

In a series of tweets, former England captain Michael Vaughan said: “Wow .. That has to go down as one of the greatest if not the greatest Test victory of all time !! Egg on my face over here in the UK .. but I love to see character & skill .. India have it in abundance .. btw

“The Greatest Test series win of all time ... Well done #India you have just shown the way for England to get back those Ashes back later in the year ...”

Following sensational scenes at the Gabba, Indian off-spinner R Ashwin thanked the Aussies for hosting them. “Good evening from Gabba!! I am sorry I couldn’t play here but thanks for hosting us and playing some hard cricket during these tough times. We will remember this series forever! @tdpaine36 @CricketAus,” wrote Ashwin.