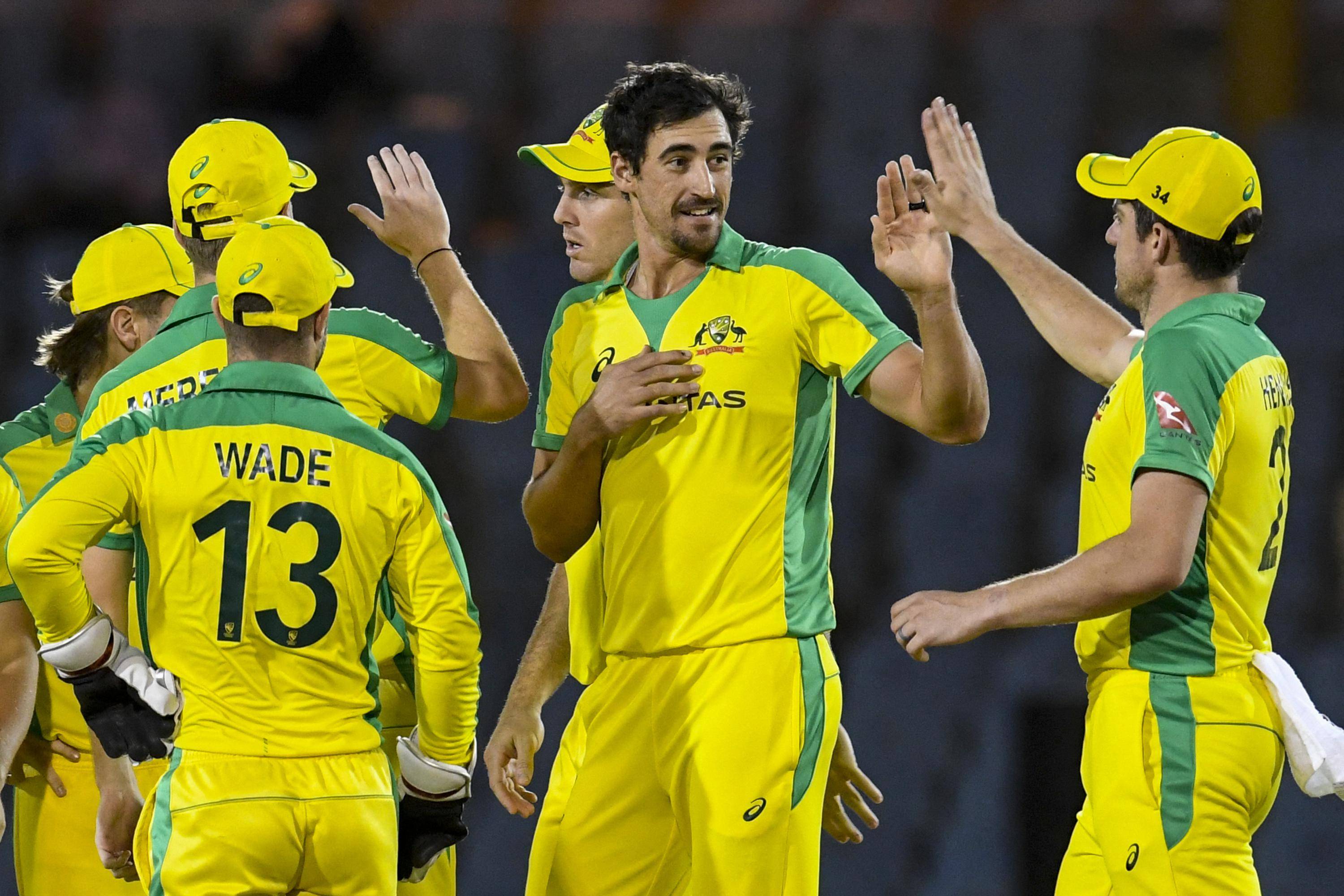 
Mitchell Starc took five wickets for 48 runs and Josh Hazlewood 3-11 as Australia bowled out the West Indies for 123 on Tuesday to win the first one-day cricket international by 133 runs.

The West Indies’ innings was in tatters at 27-6 in the eighth over and they were finally all out in the 27th over chasing a revised total of 257 in 49 overs in a rain-affected match.

Captain Kieron Pollard helped the home team fend off the threat of a record low score, making 56 and putting on 68 for the seventh wicket with Alzarri Joseph (17).

Mitchell Starc has moved to fifth for the most ODI five-wicket hauls.

Australia’s stand-in captain Alex Carey earlier also made a half century in a 104-run fifth-wicket partnership with Ashton Turner to lead the tourists to 252-9 in their 49 overs. Carey took over the captaincy for the first time in a one-day international from Aaron Finch who was ruled out of the match with a knee injury.

Leg spinner Hayden Walsh Jr. took 5-39, a maiden five-wicket bag in one-day internationals, and narrowly missed a hat trick to limit the Australian total. But the complete failure of the West Indies’ top order in the face of accurate bowling from Starc and Hazlewood gave Australia a convincing win.

“My biggest thing (in batting) is that I want the guys to fight, not just give it away because the ball is swinging or moving,” Pollard said. “I don’t like soft dismissals. We’ve worked long and hard enough. I think the most disappointing factor for me is we didn’t show that sort of fight.”

Starc dismissed Evin Lewis with the first ball of the innings, surprising the batsman with a half volley on leg stump which gripped and which Lewis parried to the bowler on his follow through. Starc then bowled Jason Mohammed with a classic in-swinger across the batsmen which ducked back and sent the off stump cartwheeling.

Shimron Hetmeyer (11) fell to Hazlewood, returning a leading edge to the bowler who snatched the ball one-ended with his right arm outstretched. Nicolas Pooran (0) fell lbw to Starc in the fifth over, struck on the line of middle and leg.

The West Indies were 23-5 when Dwayne Bravo fell to Hazlewood in the sixth over and Hazlewood had three wickets for three runs when he dismissed Jason Holder two overs later.

“It was a special day, we had three debutants and a guy captaining Australia for the first time,” Starc said. “I thought we did a fantastic job with the bat to get to 250 with a couple of really good partnerships.

“We thought there was some variable bounce and different pace there and fortunately helped us a little bit there so it was a nice start with the ball to carry on from a bit of momentum with the bat. It was nice for the group to get (Alex Carey) a win in his first game as captain."

Australia made a solid start to their innings with openers Josh Philippe and Ben McDermott, both on debut, putting on 51 for the first wicket. Carey and Turner carefully consolidated during the middle overs, taking only 23 runs and no boundaries between the 30th and 37th overs.

In conditions in which seven of nine Australian wickets fell to spinners, Walsh used the slow nature of the pitch to his advantage.

Walsh’s hat trick opportunity came when he dismissed Starc and Matthew Wade with the second and third balls of his ninth over. Both batsmen fell to Walsh’s googly, beaten by extra bounce and caught deep on the leg side from top edges.

Walsh completed his maiden five-wicket bag when Wes Agar, on debut, was stumped off a wide in the final over.

The teams meet again on Thursday in the second match and on Saturday for the final ODI. The West Indies won the preceding Twenty20 series 4-1.