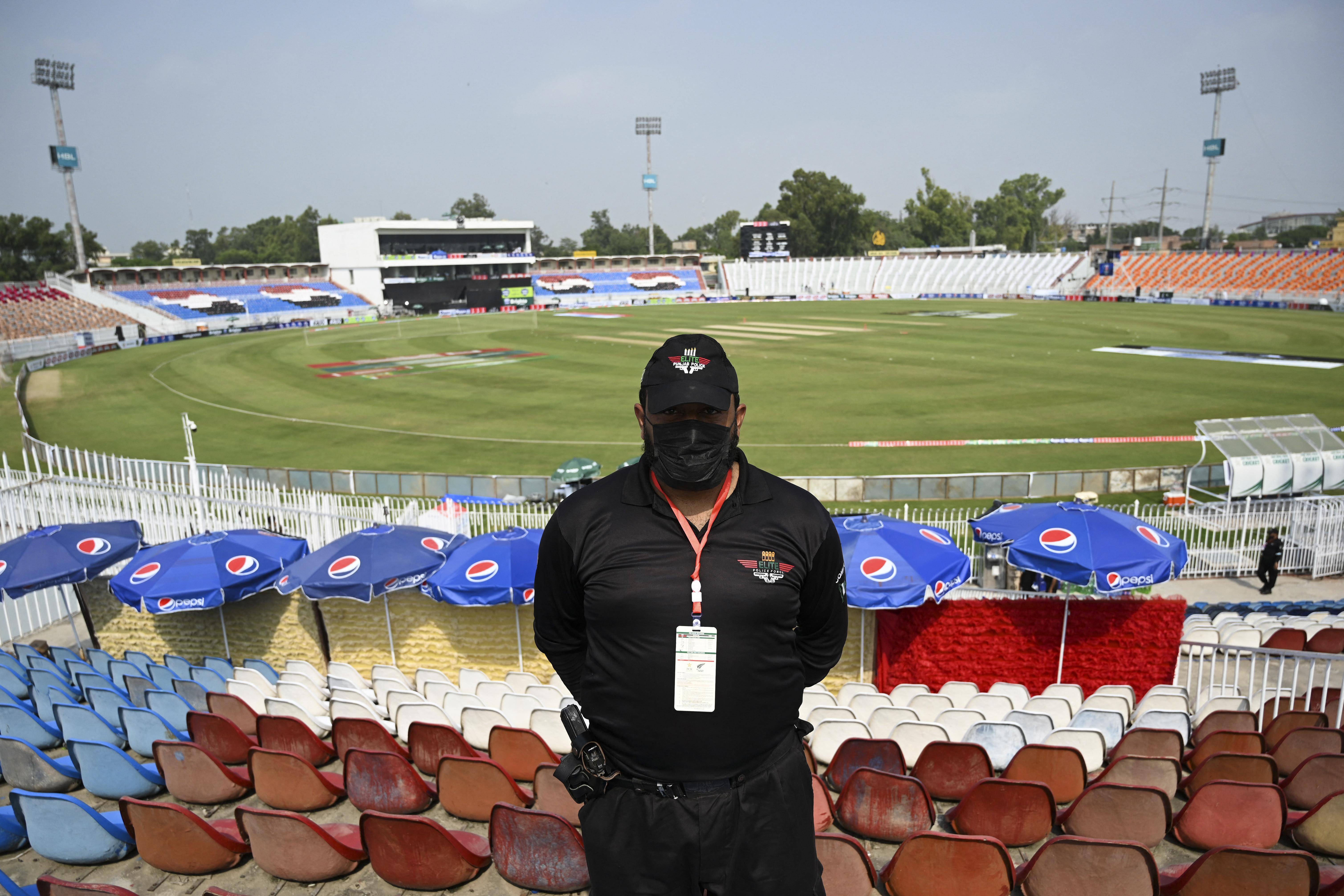 A policeman seen at an empty Rawalpindi Cricket Stadium on Friday. (AFP)

The Pakistan cricket fraternity was dismayed after New Zealand abruptly abandoned their series with the home team on Friday citing a security alert in a massive blow to the South Asian country’s hopes of staging regular international cricket.

The tour was to get underway with the first of the three one-dayers in Rawalpindi on Friday but New Zealand did not travel to the stadium.

New Zealand Cricket (NZC) then issued a statement announcing their decision to call off the tour.

“Following an escalation in the New Zealand Government threat levels for Pakistan, and advice from NZC security advisors on the ground, it has been decided the Blackcaps will not continue with the tour,” it said.

NZC declined to share details of the security threat and said arrangements were being made for the team’s departure.

The Pakistan Cricket Board (PCB) said NZC had “unilaterally decided to postpone the series” despite “foolproof security arrangements” made for the matches.

“The Pakistan Prime Minister spoke personally to the Prime Minister of New Zealand and informed her that we have one of the best intelligence systems in the world and that no security threat of any kind exists for the visiting team,” the PCB said in a statement.

“PCB is willing to continue the scheduled matches. However, cricket lovers in Pakistan and around the world will be disappointed by this last minute withdrawal.”

Newly-appointed PCB chairman Ramiz Raja’s tone, a former Pakistan captain, said they would approach the International Cricket Council (ICC) over what transpired on a “crazy day”.

“Walking out of the tour by taking a unilateral approach on a security threat is very frustrating. Especially when it’s not shared!! Which world is NZ living in?? NZ will hear us at ICC,” Raja tweeted.

More disappointment could be in store for the PCB with England now reconsidering what was to be their first Pakistan visit in 16 years to play two Twenty20 matches in Rawalpindi next month.

“We are liaising with our security team who are on the ground in Pakistan to fully understand the situation,” an England and Wales Cricket Board (ECB) spokesperson said.

The ECB will decide in the next few days if the tour should proceed.

New Zealand, minus several frontline players, were visiting Pakistan for the first time in 18 years and were also due to play five Twenty20 matches in Lahore.

Top teams have largely shunned Pakistan following an attack on the Sri Lanka team bus in 2009 that killed six policemen and two civilians.

“I understand this will be a blow for the PCB, who have been wonderful hosts, but player safety is paramount and we believe this is the only responsible option,” NZC chief executive David White said.

“I know how disappointing it will be for everyone that the game hasn’t gone ahead, but we totally support the decision that’s been made. Player safety has to be paramount,” she said in a statement.

Pakistan captain Babar Azam summed up the sentiments in Pakistan where fans have been starved of live action involving top teams.

“Extremely disappointed on the abrupt postponement of the series, which could have brought the smiles back for millions of Pakistan cricket fans,” tweeted the batsman.