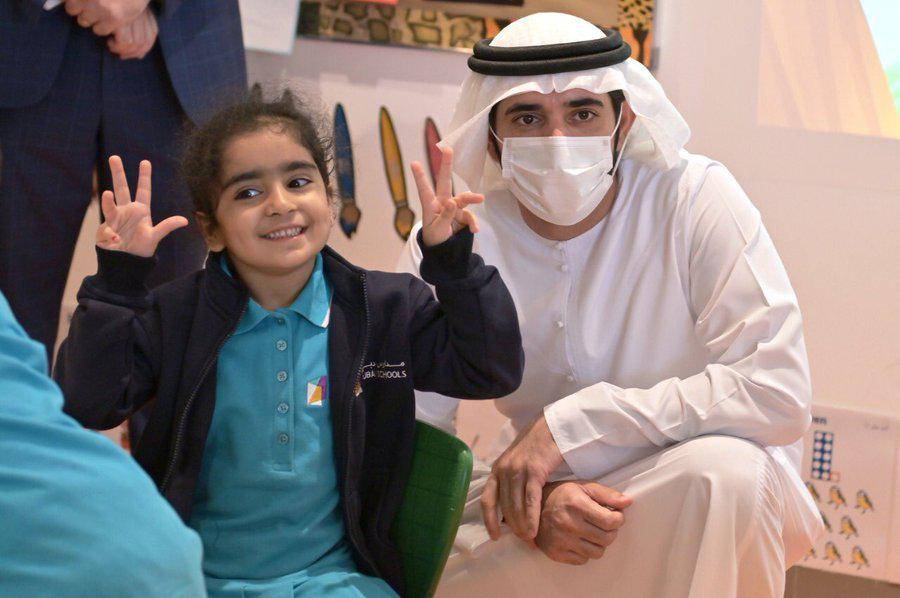 He was accompanied by Deputy Ruler of Dubai and Deputy Prime Minister and Minister of Finance Sheikh Maktoum bin Mohammed bin Rashid Al Maktoum; and Secretary-General of The Executive Council and Chairman of the Supervisory Steering Committee of Dubai Schools Abdulla Al Basti.

He reviewed education processes of Dubai Schools, a project that he launched in March 2021 to create a new Emirati schooling model that provides a global standard of education rooted in national values.

“Quality education is critical to personality development and the inculcation of creativity and innovation. We have developed an exceptional Emirati schooling model to achieve our future ambitions. Dubai is entering a new phase in which its education sector will follow international best practices and maintain the highest global benchmarks, while also upholding our Emirati and Arab identity,” he said.

Sheikh Hamdan toured the classes and facilities of the school and was briefed about the progress of the project. He directed the Dubai Schools project to create the conditions for more students to benefit from its advanced schooling system by forging partnerships with private schools and educational service providers.

The opening of Dubai Schools in Mirdif and Al Barsha, in partnership with Taaleem Company, formed part of the first of many phases of the Dubai Schools project. In August, Sheikh Hamdan issued directives to increase the number of students enrolled in Dubai Schools by 50%. The initial enrollment target of 800 students for the 2021-22 academic year has been increased to 1,200.

The project aims to build government-sponsored schools that are operated by the private sector according to global standards. Dubai Schools will ensure both Emirati students and students of other nationalities will have access to modern education in science and technology at an affordable cost. Through public-private partnerships, Dubai Schools seeks to enhance the emirate’s rise as an educational destination.