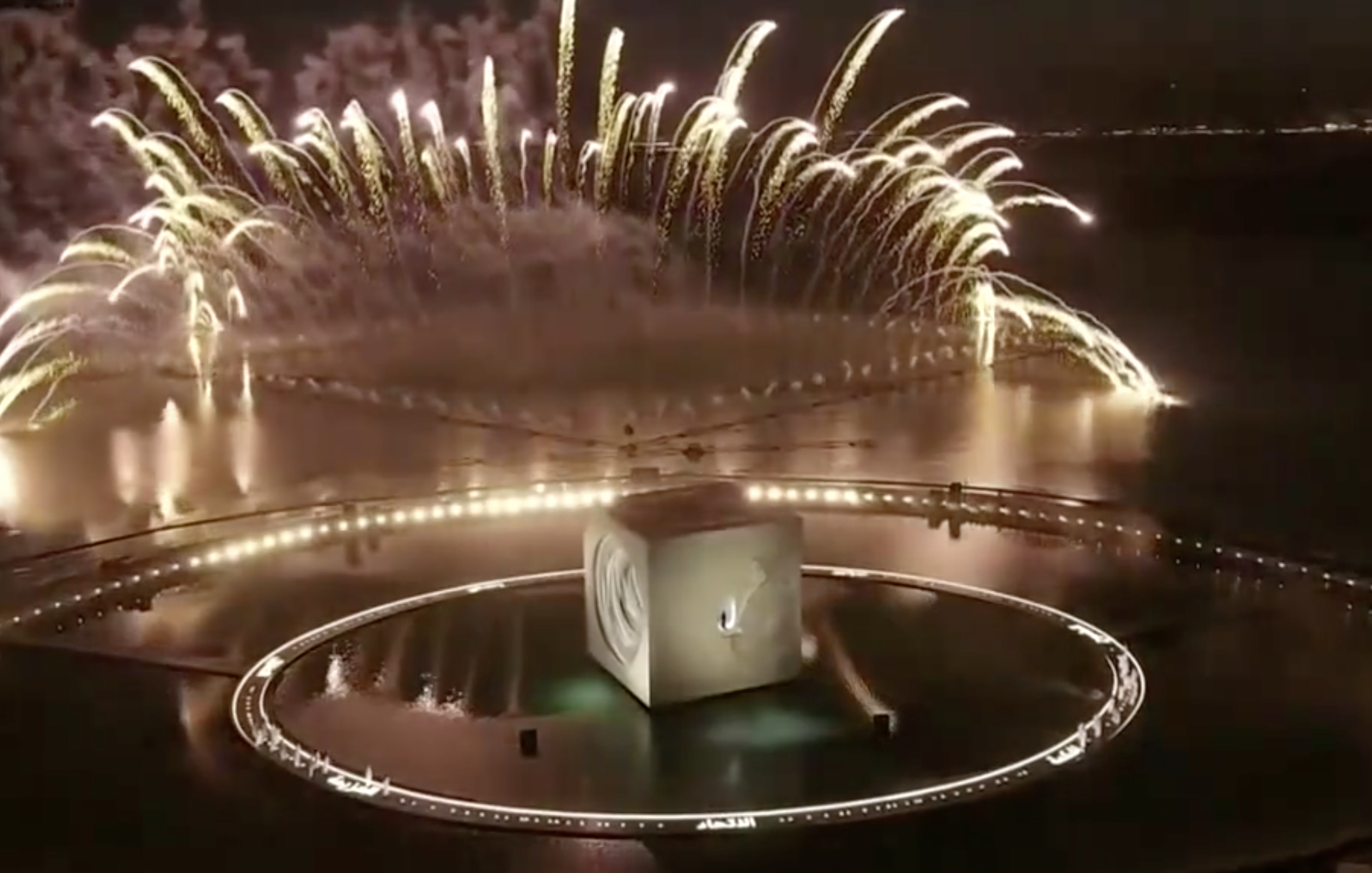 The remarkable production projected images of the UAE’s glorious past and ambitious future.

Even without huge crowds filling the stadium, this year’s National Day show was just as spectacular as it has always been. Staged in Abu Dhabi on Wednesday and broadcast live for the rest of the UAE, Seeds of the Union fittingly depicted the country’s determination, ambition and optimism. It marked the beginning of the country’s Golden Jubilee.

“As the moon shines on our 49th year for the last time, tomorrow, the sun rises on our 50th year. Our beloved country’s golden jubilee starts in a few hours,” read the parting message of the epic programme.

The remarkable production projected images of the UAE’s glorious past and ambitious future on a giant revolving tesseract surrounded by the sea, taking inspiration from the water-dwelling mangroves of the country’s coast.

Drone lights and fireworks lit up the sky, leaving scores of citizens and residents across the country in awe, filled with patriotic pride.

The grand cultural event saw the attendance of His Highness Sheikh Mohammed bin Rashid Al Maktoum, Vice-President and Prime Minister of the UAE and Ruler of Dubai; His Highness Sheikh Mohamed bin Zayed Al Nahyan, Crown Prince of Abu Dhabi and Deputy Supreme Commander of the UAE Armed Forces; Their Highnesses the Supreme Council Members and Rulers of the Emirates; Crown Princes and Deputy Rulers and sheikhs, among other senior officials.

His Highness Sheikh Mohammed bin Rashid Al Maktoum, Vice-President and Prime Minister of the UAE and Ruler of Dubai, and His Highness Sheikh Mohamed bin Zayed Al Nahyan, Crown Prince of Abu Dhabi and Deputy Supreme Commander of the UAE Armed Forces. They were joined by Sheikh Hamdan bin Mohammed bin Rashid Al Maktoum, Crown Prince of Dubai and Chairman of the Dubai Executive Council, among other officials.

Every year, thousands upon thousands would usually turn up for the National Day show. This year, however, due to social distancing norms amid the pandemic, it took the form of a virtual spectacle streamed online and broadcast live on major television channels in multiple languages.

It all started with a seed

The entire programme followed the growth of a seed into a shoot and finally into full bloom, artistically portraying the journey the UAE has taken over the past 49 years.

The spectacle showcased the country’s rich legacy and traditions and looked ahead to a vivid future in which people would remain true to Emirati values.

Above all, the message of the show is one of, unity, hope and optimism, said Khalfan Al Mazrouei, a member of the organising committee behind the grand production.

“This year has been difficult for people across the globe, and we must come together and focus on what unites us. The UAE is a nation that is built on inclusion, tolerance and diversity, and the 49th National Day celebration symbolises the country’s ongoing commitment to embracing people of all backgrounds and who call the UAE home,” he said.

A segment of the show paid tribute to the frontline heroes who have been battling Covid-19. It also recognised the historic achievement of Hazzaa AlMansoori, the first Emirati to go to space.

Producing a show at a scale as grand as that of Seeds of the Union was no mean feat — especially in the middle of a pandemic, Khalfan Al Mazrouei, a member of the organising committee, told Khaleej Times.

“It took 100s of virtual conceptualisation meetings and another 100s of production hours; which only taught us that nothing could stop creativity. Art transcends all boundaries and builds communities — it represents one of the few areas in society where people can come together to share an experience.”

The production was designed by a team of Emiratis and artistic director Es Devlin, known for creating large-scale performative sculptures and environments that fuse music, language and light.