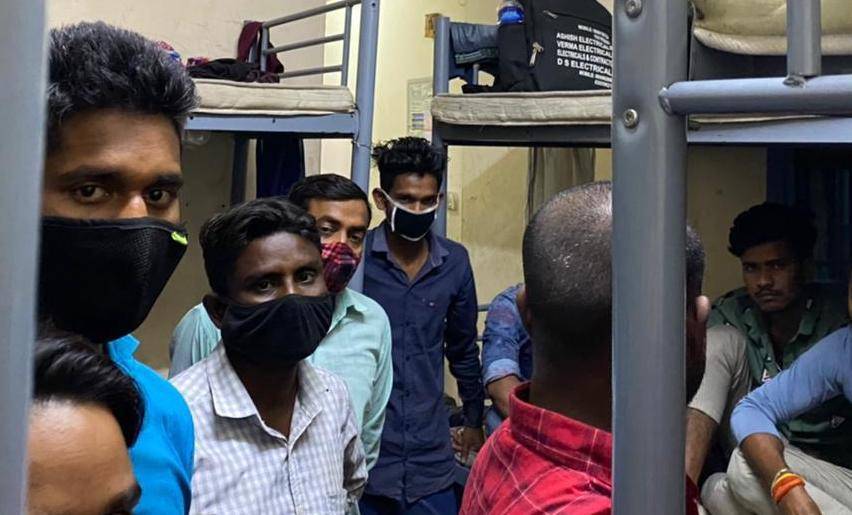 A social worker learnt about the men’s plight after seeing a few of them sitting by the roadside, crying.


Sixty-four Indian men found cramped in a one-bedroom apartment have been rescued in Sharjah. It turned out they were flown in by unscrupulous recruitment agents who promised them jobs in the UAE.

The men, who arrived on visit visas from various parts of India, claimed they were duped by a group of agents from Uttar Pradesh. Each of them had paid Rs150,000 (Dh7,500) after being told they would be employed as blue-collar workers in the UAE. The jobs never came.

Social worker Shirali Shaikh Muzaffer learnt about the men’s plight after seeing a few of them sitting by the roadside in Sharjah, crying.

“Most of these workers are skilled carpenters and AC technicians from the Indian states of UP, Bihar and Delhi. The agents told them they own a UAE company that deals in supplying labour to other companies in the Gulf,” Muzaffer said.

“These men gave the agents their life savings for the dream to start a new life here in the UAE,” he added.

Their ordeal began soon after landing in the UAE. The agent reportedly sent a driver to pick them up after making them wait for 14 long hours, the social worker explained. “As soon as they were seated in the van, they were asked to hand over their passports and were then taken to a one-bedroom flat in Sharjah.”

They were given food once, with each getting a piece of chapati and tea. But later on, the agents reportedly told them they should start fending for themselves, the workers told Muzaffer.

At one point, when they asked the agents for their passports, they were taken to a room where they were assaulted and beaten with sticks, they added. “The agents threatened the workers that they will never send them back to their home country if they protest.”

After sitting with the workers overnight, Muzaffer took down all their details and contacted a philanthropist from Abu Dhabi who arranged for food supplies and other necessities for the group.

Muzaffer — along with social worker Hidayath Addoor and Karnataka NRI president and businessman Praveen Kumar Shetty — reported the group’s ordeal to officials of the Consulate-General of India. The mission swung into action and began gathering the workers’ papers.

The consulate managed to contact the agents, who brought the workers to the UAE, and ordered them to resolve the matter as soon as possible. The mission also instructed the chairman of the consultancy to return the men’s passports and arrange for the air tickets and Covid tests of those who wish to fly back home to India.

“As instructed by the Indian consulate, I and my fellow social workers visited the agents’ office and collected the passports of all the 64 workers, and handed them over to them. We then made a list with their skills and expertise to help them get jobs in the UAE, as many of them didn’t want to return to India,” Muzaffer said.

“Out of the 64 workers, we managed to repatriate 22, with the agency paying for just 18 workers. I funded four tickets from my pocket as the agents were reluctant to pay for more. We are also glad that we managed to get jobs for eight of them as skilled workers here in the UAE. For the rest of them, we are still trying,” the social worker added.