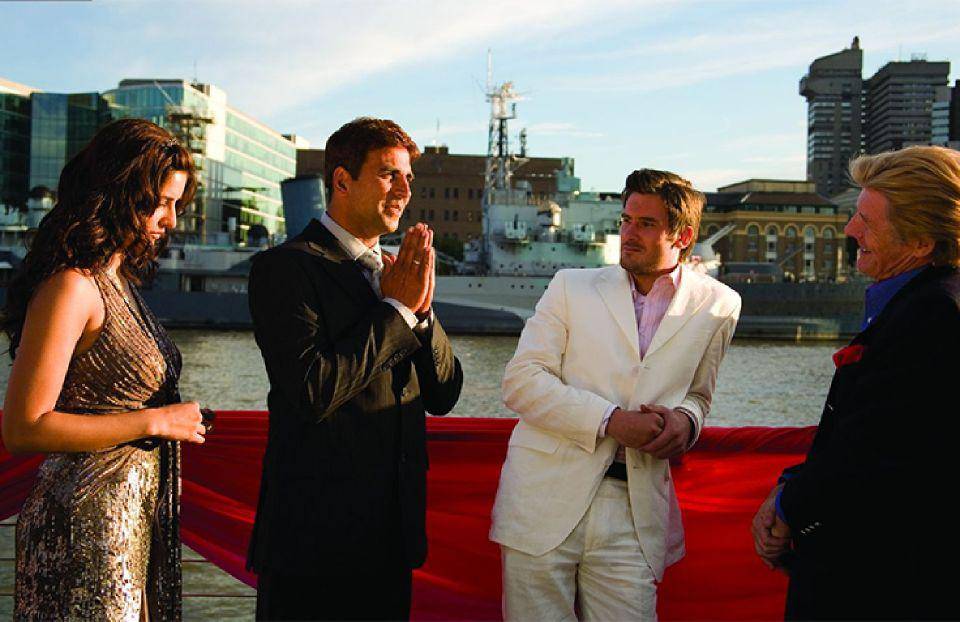 A scene from the movie Namastey London

Realising that Bollywood is big business, several regional authorities have set up dedicated units focused on providing support to filmmakers.


London is the most popular location in the UK for Bollywood — think of Cocktail, Jab Tak Hai Jaan, De De Pyar De, Patiala House, Dhan Dhana Dan Goal, Bhagam Bhag and so on. The next favourite has to be the sylvan spaces in Yorkshire, which has a large population of Indian and Pakistani origin, where local officials have courted and welcomed Indian filmmakers to come and shoot. The glamour of the entire film fraternity descended in the county for the IIFA Awards in 2007, when during that weekend alone the region’s economy gained by nearly 10 million pounds. Yorkshire has also gained because higher costs in London have driven some filmmakers to look elsewhere in recent years.

Realising that Bollywood is big business, several regional authorities have set up dedicated units focused on providing support (and also some funds) to foreign filmmakers. They interact closely with officials based in Mumbai, Chennai and elsewhere to help bring projects to their regions. Foreign filmmakers spend over 1 billion pounds annually in Britain; most of them are Hollywood projects, but there is a growing trend of Indian films shot across the country. British locations have long featured in Hollywood films, but the list of Indian films (not only Hindi ones) basing their storylines in locations across the UK has grown rapidly.

Screen Yorkshire, a local body that supports film projects at various levels, launched a dedicated office in 2018 to facilitate UK and international productions looking to film in the region. Its services are publicly funded and free to use, staffed by experienced industry professionals, helping productions with location scouting, hiring local crew, assistance securing filming permissions from local authorities, facilities procurement and more. The team has supported a number of recent production enquiries for Indian films with production planned in Yorkshire later this year. There are no specific incentives for Indian productions looking to film in Yorkshire, but Screen Yorkshire has an investment fund — the Yorkshire Content Fund — which is open to applications from international films that plan to base themselves in the region.

Some of the recent films shot in Yorkshire include: Pagalpanti (2019), The Accidental Prime Minister (2018), Gold (2018), Ek Hasina Thi, Ek Diwana Tha (2016); Welcome 2 Karachi (2015)… Such is the interest in attracting Indian filmmakers that, in 2017, when Akshay Kumar was shooting in Doncaster, Rotherham and Bradford for Gold, BBC reported it with the headline: ‘Bollywood comes to Yorkshire — and helps UK film industry strike Gold’.

Bradford, with a large population of mainly Pakistani, but also Indian, origin, is the Unesco’s first City of Film, where Indian films unify communities across language and borders. A document by local authorities notes India’s linguistic and religious diversity, and says: “Bollywood is a uniting thread amid the diversity of this vast nation with movies helping to bridge the language divide. They perform a similar role here in the UK. Pakistanis are Punjabi speakers and enjoy the same films as those who speak Hindi and Urdu…Bollywood movies are produced in a mixture of Hindi and Urdu languages, and increasingly in a mix of Hindi and English, known as Hinglish.” In fact, the growing use of the portmanteau in Indian films (including in titles such as Jab We Met and Love Aaj Kal) and everyday interactions prompted the Portsmouth College to launch a course in Hinglish in 2018, attracting much interest.

Yash Chopra, the legendary director, is credited with driving increasing Indian interest in using British locations after his Lamhe (1991) featured several locations, including London and the Lake District. His son Aditya Chopra and later Karan Johar continued the trend, with their blockbusters Dilwale Dulhania Le Jayenge (1995) and Kabhi Khushi Kabhie Gham (2001). As Britain’s love affair with Bollywood continues to grow, several ‘Bollywood dance’ schools have emerged across the country, while Anupam Kher opened an acting school and Amitabh Bachchan carried the Torch during the 2012 London Olympics.