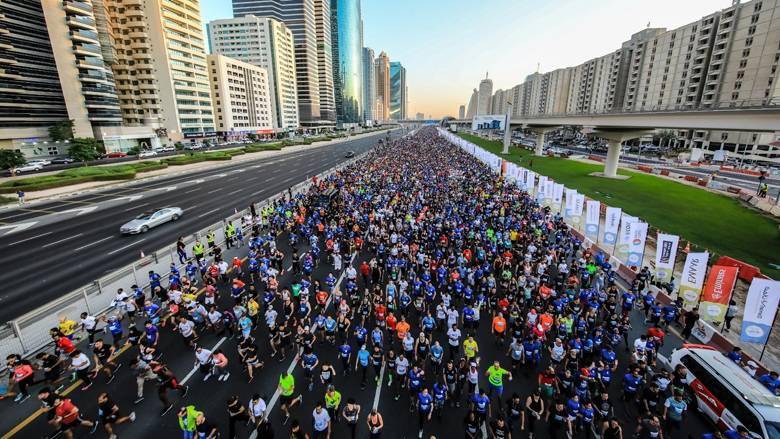 
The act of running was long associated with athletes on the track, training hard to win medals and glory at Olympics and other events. Or, in many parts of the Indian subcontinent, it was an act of punishment: if you did something wrong, you would be told to run 20 times around the field. It was rarely linked with fun and enjoyment. There were not many like soldier Paan Singh Tomar (1932-1981), whose enjoyment of running raised him to international heights, depicted splendidly by Irrfan Khan in the 2012 film of the same name. But now check out parks, pavements and other urban spaces in Dubai, Delhi, Denver, London or elsewhere, any time of the day: running has become an increasingly common sight, with people not only enjoying the act but, in the process, also overcoming a host of physical and mental conditions. And it is no longer confined to the young: the fastest growth in recent years has been of men and women in their 50s and beyond — many going on to run marathons and more.

Call it jogging, sprinting or running, experts say we are all born to run, barefoot. The Tarahumara tribe in Mexico still runs long distances barefoot, reminiscent of the days of hunter-gatherers, when human beings needed to run down prey. The idea of running barefoot has found some takers, but the contemporary reality is that running has become a thriving sub-culture, sustaining a multi-billion pound industry that spans specialised shoes, nutrition, clothing, timing, coaching, physiotherapy, mega marathon and ultra-marathon events, 3D gait analysis, documentaries and best-selling literature, including Haruki Murakami’s delightful What I Talk About When I Talk About Running. One of the smallest Facebook groups has over 35,000 runners across continents, while coaches with online channels are followed by hundreds of thousands of amateur runners.

Says Natasha Giannousi-Varney, endurance coach at Headington Road Runners in Oxford: “The running scene has definitely acquired mass movement status. It is a versatile sport and you can make of it whatever you want: competitive, super sociable, meditative, fat-burning, cheap (or expensive if that’s what you choose), and flexible. Just put on your shoes and out the door you go — in the trails or the urban pavements, on the track or the roads. Amidst the terrible reality of a pandemic, it has been a life saver for many: a 20- to 30-minute run is enough for the feel-good hormones to kick in. Anyone can start, at any age, but I do recommend that after the age of 50, running is combined with some form of strength training. Women seem to be driving the sport’s growth right now. Figures say that for nearly a decade, more women runners have been crossing the marathon finish line than men. In the US, women make up 57 per cent of finishers — that’s about 10.7 million women racing. Globally, female race participation is up 25 per cent, compared to 7 per cent for men.”

As Natasha suggests, there are many success stories, individual and collective. Here are three: of a man who sparked a passion for running from a park in west London, now spread to 23 countries; of a diplomat (India’s next ambassador to Iraq), who runs ultra-marathons; and an iconic 110-year-old runner who ran his first marathon at the age of 89.

If you were in or around any of the hundreds of sylvan parks across England last Saturday (July 24), you would have heard whoops of delight. The reason: a unique 5km running event was allowed to resume after 16 months of suspension due to the Covid-19 pandemic. There were scenes of unbridled joy and jubilation as tens of thousands of people of all ages, including mothers with children in strollers, others with pushchairs and dogs on leashes, came together and ran the distance as part of a grassroots health campaign that has become a global phenomenon. Among the runners were celebrities, ministers and top experts dealing with the pandemic.

Hailed as a major health booster, the event — called ‘parkrun’ — was founded in Bushy Park in 2004. The free-to-enter community event held every Saturday morning has produced so many success stories that the National Health Service prescribes ‘parkrun’ to patients to overcome physical and mental health challenges. Almost every town and park across Britain has a group, some with thousands of members; many are known as ‘parkrun’ veterans, while others begin there and progress to run marathons. Northampton-based Bob Emmerson, 88, who ran the London Marathon 17 times, was stuck at 399 when the pandemic hit; his 400th ‘parkrun’ on Saturday became the subject of headlines.

‘Parkrun’ events foster a positive, welcoming and inclusive experience where there is no time limit, and no one finishes last. Each runner’s time is recorded through a barcode. “Everyone is welcome to come along, whether you walk, jog, run, volunteer or spectate,” the organisers based in a small Thames island in Twickenham say. Prior to the suspension, the events were taking place in over 2,000 locations across 23 countries; nearly 7 million people around the world are registered and, in normal times, 350,000 people walk, jog, run and volunteer at their local community event every weekend, with records standing at 15:49 (women) and 13:48 (men).

Zimbabwe-born software engineer Paul Sinton-Hewitt, 61, who grew up in South Africa, started it all at a time when he was down and faced challenges in his life. He says: “I am proud that parkrun has become a sanctuary for millions of people from all sorts of backgrounds. But it didn’t start out that way. At that first event in October 2004, I was one of 18 white, middle-class people, in a Royal Park in an affluent suburb of London who participated in what we now know as parkrun. It’s an uncomfortable truth but the running sector has long struggled with a lack of diversity in participation. We’ve long felt it is these communities that potentially have the most to gain from participating in events such as parkrun, which is our movement of real people and communities, empowering themselves and those around them to do positive things for themselves and one another. As a society, we must consider how we deal with the ever-growing epidemic of medical issues related to modern sedentary lifestyles. Non-runners think they can’t run. In parkrun’s life, there are millions of stories of people who’ve said, ‘I didn’t think I can do it, but I’m doing it now’. Everybody is capable of running unless they’re suffering from a specific disability or acute injury. Everybody can run, and everybody should run.”

In 2014, he was awarded the royal honour of CBE for “services to grassroots sports participation”, and, in 2019, the Royal Society of Arts honoured him with the Albert Medal for building a global participation movement. Both ‘parkrun’ and Facebook began in 2004, but the thought of monetising it has never crossed his mind.

A diplomat ‘on the run’

Few bits in the quiet world of diplomacy emerge in the public domain, but other interests of some diplomats like Prashant Pise, who takes over as India’s ambassador to Iraq next week, become better known. He symbolises what some running experts now call the ‘post-marathon age’: the idea that running 42km in a marathon is no longer impressive, it has become so common that everybody knows somebody who has run a marathon, only an ultra-marathon (50km, 100km, 170km, or more) cuts it.

Pise, 50, an India Foreign Service officer of the 1995 cadre, has run over 40 ultra-marathons and 30 plus marathons, a feat that most cannot even dream of. Hailing from Nagpur, Pise is one of the rare Indians to have completed the gruelling UTMB (Ultra-Trail du Mont Blanc), one of the most challenging in the world of ultra-marathons twice — in 2015 and 2016. Its 171km course runs through mountains, glaciers and trail-tracks over 10,000 m elevation across three countries — Italy, France, Switzerland — and needs to be completed over two days and nights (within 46 hours and 30 minutes). To merely complete the course within the time limit is to win; running around Mont-Blanc is described as an inner adventure that pushes mental and physical limits.

Pise, who runs at least 2 hours every day, says: “For runners, UTMB has the same place that the Lord’s cricket ground has for every cricketer. It was a challenge of a lifetime, a real test of physical and mental strength. I had to dig deep and constantly remind myself why I wanted to go beyond the comfort level and pain barrier. I personally went through my highest highs and lowest lows, but, in the end, I felt completely transformed as a person. Even after going through daunting moments of hardship, I wouldn’t trade the unquantifiable joy and the sense of accomplishment for anything in the world. I feel fortunate that I could finish this legendary race twice. In many ways, it was a journey of self-realisation: knowing my potential as a person, of what I could achieve if I was determined to endure pain and hardship.”

His other ultra-races include the Comrades Marathon (89km) in South Africa and the Ultra Mirage El Djerid (101km) in Tunisia.

The incredible story of London-based Fauja Singh, 110 years old, either shames you or inspires you to run. Hailing from the farming village of Beas Pind in Jalandhar district near the India-Pakistan border, Singh is an icon in the world of running and beyond. Born in 1911, he could not walk on his short, spindly legs until the age of 10; he later took to farming like others in the village; married Gian Kaur and had three boys and three girls: one of them settled in Canada, others in England and one, Kuldip, stayed with him. In 1992, his wife died and Kuldip was killed in a farm accident in 1994. Forlorn and depressed, Singh, then 83, was wasting away in the village, when his children in England decided he should come over. He moved to London, and to distract himself, soon began running with others at community events.

It was while watching people run a marathon on television that Singh decided he could as well do that. He met amateur runner Harmader Singh, who coached others, and entered the London Marathon in 2000, finishing in 6 hours and 54 minutes at the age of 89; in the next year’s marathon, he broke the record of 7 hours and 52 minutes by 57 minutes to be the fastest marathoner over the age of 90, sparking a deluge of attention from the Asian community, media and the wider public. An ad campaign featured Singh alongside football legend David Beckham. The Guinness Book of World Records denied him an entry because he did not have a birth certificate to prove his age. During the 2012 London Olympics, he was one of the torch bearers.

Singh says: “Living life is like running a marathon. It takes a lot of courage and tenacity to keep going till the end. Laughter and happiness is what life should be about, that’s your remedy for everything. Running makes you more spiritually aware and in tune with your inner-self. There are two noble things in life: one is to do charity; and other is to look after your body. Running has made my life worthwhile. I used to be more dead than alive after the personal tragedy in my life. I have retired but only in body. Spiritually, I still feel able. The moment I fell in love with running, I started forgetting my grief and traumas. Life is a waste without humour — living is all about happiness and laughter. I am inspired by honest people who don’t cheat others. To me the famous are those who are kind to fellow human beings and dedicate their life to charity.”

Singh, incidentally, also holds the ‘parkrun’ age graded record of completing the 5km run in 38:34 — a rather agreeable time for people half his age.

(Prasun is a journalist based in London. He tweets @PrasunSonwalkar.)