Dubai: The urban Filipino artist who is inspired by dreams 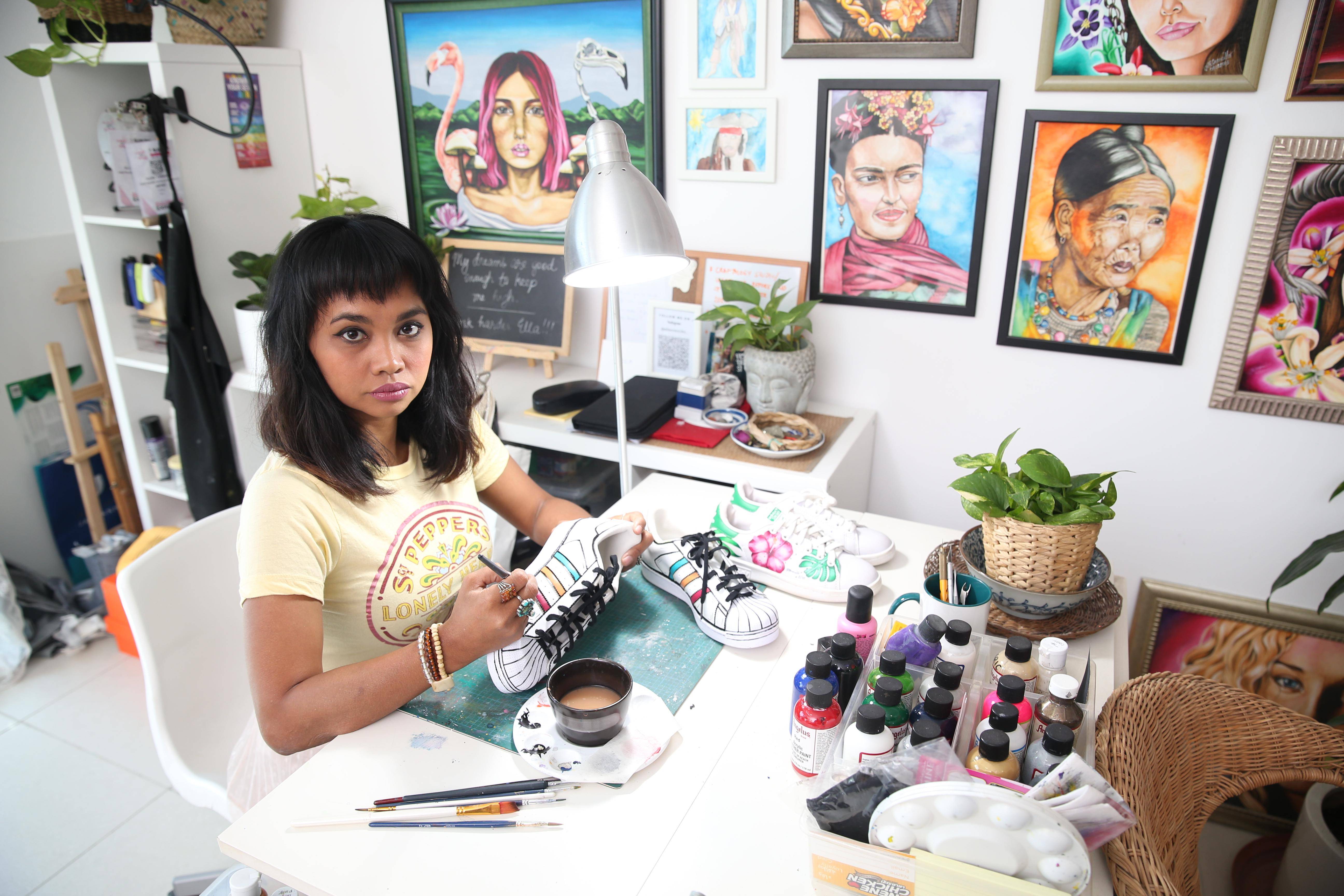 Ella Orencillo is part of the movement that popularized urban art in the UAE.

She was born Romela Elenzano Orencillo, but everyone today knows her as Ella Orencillo. This Filipino artist was born and raised in Quezon City, Philippines. She’ll be 39 this year, and says, “I can’t wait to be 40!”

Ella, who started her career as an airbrush artist in the Philippines in 1999, now calls the UAE her second home. Watching her at work, it’s tough to guess why she insists on calling herself a pedantic artist, but as we get talking, one learns about her passions, quirks, inspirations, and more. But foremost she clarifies (laughs), “My mother thought she was having a boy and was planning to call me Romel, but ended up having me (a baby girl) hence decided to call me Romela.” We track her artistic journey, which started in the UAE in 2008. Though she started to paint whilst she worked as a receptionist, “Having worked as an artist since I was 16, I realised how much I miss pursuing art, hence I began to paint on canvasses in 2010.”

In 2012, she started her shoe customisation career at Level Shoes, The Dubai Mall. Since then, she has been commissioned by different brands such as Laura Mercier, PUMA Creative Factory, Fendi, etc. to name a few. In 2019, she established her company, Craftology by Ella Orencillo. Craftology is also a resident customiser at Level Shoes. In just over a year, the company was hired to do several big events like the launch of Adidas’ Home of Classics, Al Hosn Festival in Abu Dhabi, Back to School by Sprayground GCC, a two-month activation in Fashion District Bahrain City Center, and more. She was also named as one of the most influential Filipinos in the Gulf by Illustrado Magazine.

Why do you call yourself a pedantic artist?

“Pedantic” means being obsessively concerned with small details. I learnt of the word from an ex-co-worker, who would write down a new, unfamiliar word every day on the office whiteboard. I confess being guilty about obsessing with minute details at work and otherwise; it is both a blessing and a curse! I tend to micromanage everything.

Define urban art for us.

Initially, urban art was described as an art form that can be seen in public, such as wall art/murals or graffiti. But, as time has gone by, I believe it has evolved. It does not necessarily have to be on walls, it can be something that you wear, such as on your shoes or jacket.

Where did your early inspirations of art come from?

It came from the people that inspired me, whether someone I knew, a celebrity or a musician. And well, other than that most of my paintings are inspired by my dreams.

So did you ever study art and plan it as a career option?

I didn’t. I was a Psychology major. But, I have been pursuing art for a living since I was 16. After I finished my studies, I didn’t think a time would come when one day I’d have my company! It was just fun and play at that time. I was young and getting paid to do what I love to do. I did not plan that one day, arts would be my source of income. However, I soon enough realised that it was my passion even without any money involved. Later, projects and commissions started coming in. And by 2017, I realised that I could be a full-time artist and make a living out of it.

Your art is a mix of graffiti meet revolutionary, if one may say so. What’s the thought process there?

Thank you for that comment, I take it as a huge compliment. In regards to the thought process, most of my paintings come from my dreams. I normally dream a scene and as soon as I wake up, I try to do a rough sketch and make notes about it (dream) so I remember it when I have the time to paint it. When it comes to clients, I love talking to them to pick their brains and come up with an idea of what would interest them. Over the years, I have developed a gift of having a gut feeling of what the client would want to be done. I have a very interesting job!

Does a gender divide exist in the art industry?

I sort of feel that the industry is still somewhat male-dominated, but a lot of female art movements around the world have become visible lately. I firmly believe that anytime soon the art industry will have gender equality. In regards to being a female artist in the UAE, I’d like to take it as a challenge that being a female artist/muralist does not limit me from doing what male artists can do.

How and why did you think of Craftology?

Craftology was long overdue but happened at the right time. In 2019, the opportunity came in and I was able to use it; it was just putting things that I have been doing for a long time under one banner.

I enjoy them all! Art, in whatever form it may be, having a different kind of “canvas” to work with every single time is one of the many things why I love my job. On consecutive days, I work on shoes and a mural comes up, I get excited. And after working on a mural project, I’d be excited to paint on shoes because I missed it. And another thing that I love is, I get to be on a different job site every time.

If not an artist, you would have been...

A teacher. I have been a teacher (online) before and I thoroughly enjoyed it and would love to do it, again.

The Filipino art movement in the UAE

The Filipino art movement in Dubai has been active and visible for a long time, with pioneers in the movement such as Brownmonkeys and Japat Guevarra setting the path. They were among the first few who paved the way for other Filipino artists to be in the scene. It is great to see how things have evolved and more Filipino artists are sharing their art and bringing honour to our country.

Making a fashion-art statement with shoes

“Give a girl the right shoes and she can conquer the world,” as Coco Chanel said. I believe that shoes can make or break your ensemble. And what better than a pair of customised shoes! The demand for shoe customisation is overwhelming, I guess that speaks of how much we desire to express ourselves through what we wear. When it comes to bespoke shoes, I love it when someone has a bunch of ideas on their mind on how/what they would love to see on their shoes. Someone who has a lot of ideas is better than someone who doesn’t have any idea at all.