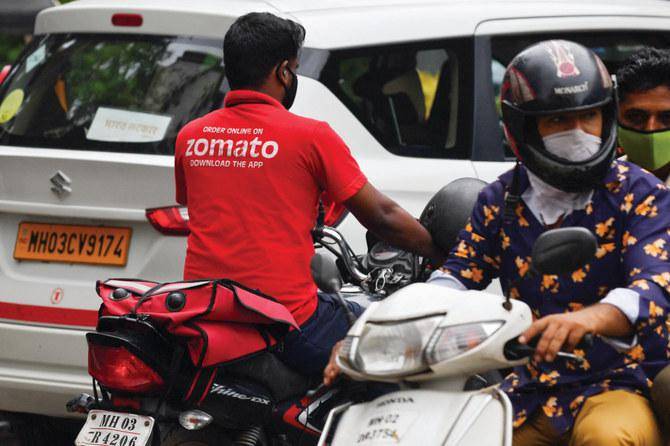 Zomato is available in 525 Indian cities and caters to some 6.8 million customers every month and has become a household name in the country.

Trading likely to begin on BSE, NSE on July 27


Shares in food delivery app Zomato, one of India's biggest tech startups that launched its initial public offering (IPO)on Wednesday, was subscribed 1.05 times at the end of the first day, according to the data available with the Bombay Stock Exchange (BSE).

In the employees’ segment, shares were subscribed around 18 per cent amid analysts’ growing concern over the high valuation of the loss-making company, which is backed by Chinese billionaire Jack Ma’s Ant Group.

Zomato's three-day offering, which ends on Friday and with shares priced between Rs72 to Rs76 per share, is expected to take the company's valuation to $9 billion.

Trading is likely to begin on both the BSE and National Stock Exchange (NSE) on July 27.

The IPO comes at a time when Indian and global markets are at near record highs.

However, the bull run in Indian bourses is contrary to the sluggish growth rate of the world’s sixth-largest economy.

The expansion rate has been faltering quarter-on-quarter on the back of a ballooning fiscal deficit and growing unemployment — partly due to the negative impact of the Covid-19 pandemic for the second year in a row — and have raised analysts' fears of a stock market bubble that could be bolstered further by highly-valued tech companies going public.

Earlier, Zomato had allotted shares worth $562.3 million to about 200 foreign and domestic investors.

The list included major international private equity firms such as Tiger Global and BlackRock, and Indian investment funds from some of the country's biggest banks such as State Bank of India, Kotak, ICICI and HDFC.

Zomato offers food delivery and curates restaurant reviews. It is available in 525 cities and caters to some 6.8 million customers every month and has become a household name in India.

The raging contagion and intermittent Covid-19-induced lockdowns have hit Zomato's business hard. Its revenue for the financial year ending March 2021 was down by 23.4 per cent from the previous year.

The company expects its costs to increase over time and losses will continue given significant investments expected towards growing the company's business.

However, despite the losses Zomato’s businesses appear to have grown seven times since 2018 compared to 3.6 times growth of the food delivery industry.

Info Edge, one of Zomato's leading investors, holds a 18.55 per cent stake in the IPO.

The firm will sell only 50 per cent of its stake worth Rs3.75 billion during the share sale. Other investors in Zomato are Uber (9.13 per cent), Alipay Singapore Holding (8.33 per cent), Tiger Global (six per cent), Sequoia Capital (5.98 per cent), co-founder Deepinder Goyal (5.51 per cent) and Temasek Holdings subsidiary (3.65 per cent).

Operational footprint in UAE, despite 2019 exit

On March 4, 2019, Zomato sold its business in the UAE to Germany’s Delivery Hero Group for around $172 million. The deal was aimed to give the startup fresh capital to invest in more lucrative markets such as India.

The UAE was Zomato’s first global foray in 2012.

The restaurant guide and online food-ordering company also launched its premium service, Zomato Gold, in the UAE in 2017. And the UAE is not the first market that Zomato exited.

In 2016, it had scaled back from nine out of 23 international markets such as the United States, United Kingdom, Sri Lanka, Ireland, Chile, Canada, Brazil, Italy and Slovakia, and four Indian cities including Lucknow, Kochi, Indore and Coimbatore to reserve cash.

However, Zomato has not exited from the UAE. Though Delivery Hero owns the business, Zomato continues to operate it. Besides, Delivery Hero has made an equity investment of $50 million in Zomato.